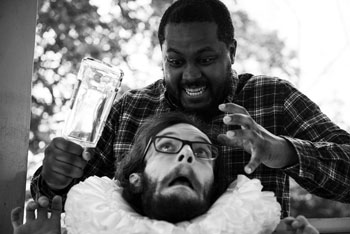 If you are a Shakespeare buff, you appreciate a modern — and grown-up —  twist on a classic story or you are just looking for a fun evening with friends and a chance to enjoy some drinks, then Sweet Tea Shakespeare has the show for you. The opening night of “HamLIT” is Oct. 4. The play premiered at the Fayetteville Dinner Theatre, Sept. 27-28.
Unlike what one might typically expect from a Shakespeare performance, STS makes sure the attendees have a unique and exciting time by immersing them in the experience. “Sweet Tea is known for its audience interaction and, with a LIT show, we turn that up to 11, to use a Spinal Tap reference,” Nathan Pearce, one of the show’s three directors, said.
Be prepared — STS will keep the audience on their toes.  “They should get ready to be in the middle of the action. Audiences will be seated on three sides of the stage, with the majority of the action happening right in the middle of them. Occasionally, actors will even walk amongst the audience to really give them the sense that they are part of the story and not just watching it unfold,” Pearce said.
To keep with the “LIT” theme, craft beer, wine, Winterbloom tea and a special cocktail will be available for purchase at the show. Outside food and drinks are not permitted.
“‘HamLIT’ aims to bring more of the subdued humor to the surface while also adding even more in the form of the drinking games, improv comedy and audience participation,” Pearce explained. By cutting down the classic Shakespearean play “Hamlet” to the bare bones storyline and adding in some games and improv, STS creates a theatrical frat party that you would think was organized by Will Shakespeare himself. “We want to bring that random, crazy atmosphere to each performance,” said Pearce.
One of the highlights of “HamLIT” is that the performers feed off of the audience’s reactions. “My favorite part is how much fun we as performers get to have with this show,” said Pearce.
“Also, I love that each show is different. Since we rely on improv throughout the show, each performance has something new. That’s why we offer so many opportunities for people to see ‘HamLIT.’” Offering numerous performances across several venues, the audience will never see the same show twice.
STS understandably describes its adult-only show as “bold and irreverent,” offering tragedy, comedy, improv and a quirky and unusual theatrical performance that attendees will not forget.
“HamLIT” will be at the Arts Council from Oct. 4-Nov. 1. STS will also perform the show on Oct. 10 at Dirtbag Ales, from Oct. 11-26 at Paddy’s and from Oct. 18-Nov. 9 at Hugger Mugger.
To learn more about buying tickets and the different venues, visit http://www.sweetteashakespeare.com/