Patti LaBelle set to perform at the Crown 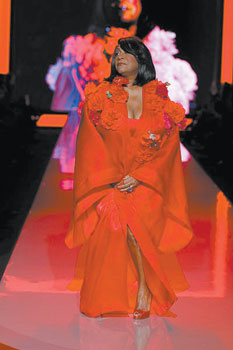 Most of America knows Patti LaBelle for her voice and music career spanning four decades, but she is a true entrepreneur in every sense of the word. If you’ve missed her on TV, or on the Broadway stage, the Crown Theater presents music icon LaBelle in concert Friday, Nov. 8, at 7 p.m.  LaBelle, born Patricia Louise Holte, is known as the “Godmother of Soul.” She began her musical career as lead singer and front woman of the vocal group, Patti LaBelle and the Bluebelles. She is a dramatic soprano who has sold more than 50 million records worldwide.

LaBelle became a mainstream solo star in 1984 following the success of the singles “If Only You Knew,” “New Attitude” and “Stir It Up.” In 1986, she scored with the No. 1 album, “Winner In You” and the No. 1 duet single “On My Own,” with Michael McDonald.

Outside of touring she has written six books and started her own product line of cakes, sauces, cobblers and sweet potato pie. She has her own cooking show, “Patti LaBelle’s Place,” which premiered its second season on the Cooking Channel in 2017.

Her humanitarian efforts include being an advocate for adoption, diabetes, cancer, HIV/AIDS and many other causes. In 1994, LaBelle was diagnosed with diabetes and became the spokesperson for the American Diabetes Association.
LaBelle has been inducted into the the Grammy Hall of Fame, the Hollywood Walk of Fame and the Apollo Theater Hall of Fame.
Ticket cost is $55, $70, $95 and $135. For more information call 910-438-4100.