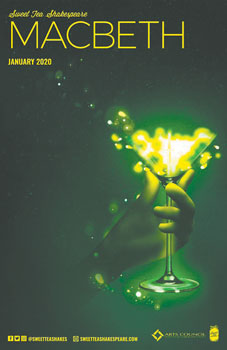 Sweet Tea Shakespeare is adding a new flavor to its productions this year. It’s bringing “Macbeth” to the Cumberland County community. While Director K.P. Powell has never directed “Macbeth,” he has performed in “Macbeth” four times and in over 150 shows. He’s also directed “Two Aside” at Saint Louis University, some music videos at the American Shakespeare Center and some short films. The show opens Jan. 2 and runs through Jan. 26.

Powell feels his prior experience gives him intimate knowledge of this particular play. He will be working with a small cast, including students from around the region during the student matinees, and is looking forward to working closely with the audience to create a profound personal experience.

“The story of Macbeth creates an opportunity for the audience to follow closely with the two hugely recognizable characters,” said Powell. “They can enjoy watching the other actors switch between characters constantly and not be confused. I really hope to advocate for the audience. I’m trying to direct it as though I have no idea what happens, that way the story shines rather than my particular tastes or ideas.”

The main characters, Macbeth and Lady Macbeth, are played by Wade Newhouse and Chelsea Sugar. The audience can expect to be pulled into the spirit of the show. There will be people sitting on stage with the actors, where the actors talk to them — not at them. Plus, there is live music. “Shakespeare feels like a conversation, not a literary lesson,” Powell said.

Opening date is Jan. 2, 2020. The production runs through the Jan. 26 at Vizcaya Villa. There are some select performances at William Peace University in Raleigh and Methodist University as well. The cost is $25 dollars at the door, but advance tickets are $10 for students, $15 for senior/military and $17.50 for adults and can be purchased here: www.sweetteashakespeare.com/tickets.