Local organizations to compete in the Ultimate Lip Sync Showdown 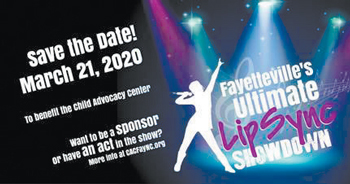 Due to the spread of COVID-19, as a precaution, the Ultimate Lip Sync Showdown has been postponed. The new date is June 20. The location and time remain the same (Crown Ballroom, 6 p.m. Social Hour & 7 p.m. Show Time). For patrons who purchased tickets for the March 21 show, you may use the same tickets for the June 20 show. There is no need to exchange them for new tickets. For patrons who purchased tickets but are unable to use their tickets for the June 20 show and who wish to receive a refund, please follow these instructions:

Sponsors who received tickets as part of their sponsor benefits will be contacted directly by the CAC.

It’s a safe to wager that most people have spent some time lip syncing to their favorite jams. Whether it’s when a catchy song plays on the radio or a tune worth foot-tapping for plays in a movie, some bops are hard not to mouth the words to. In Fayetteville’s Ultimate Lip Sync Showdown, which will take place March 21 at 6 p.m. in the Crown Ballroom,  local organizations and individuals take their best lip sync routines to the stage and go head-to-head for a great cause.

The event’s proceeds make up about 20% of the annual budget for the Child Advocacy Center, the nonprofit charitable organization that puts on the event. The CAC serves the community in a variety of ways, with outreach programs, child abuse awareness campaigns, teaching programs, and of sex-trafficking awareness initiatives, to name a few. In the fiscal year of 2019, the CAC served 730 children.

Julia Adkins, who is the chair of Fayetteville’s Ultimate Lip Sync Showdown, projects that the upcoming event will, as it always is, be a huge success. “This is our 4th year,” Adkins said, “In the past 3 years, we’ve raised $30,000 each year. The Showdown is on track to be another sellout show, and we are excited — truly blessed.”

This year, there are 14 acts. The organizers of the event invited competitors from years past to compete again, but new contenders will be ready to face off as well. Among the competitors, law enforcement, schools, healthcare professionals and local businesses are represented.

Last year, the winning group performed a song from “The Greatest Showman.” This year, Adkins said a variety of popular hits include songs by Cher, Lizzo, Ike and Tina Turner and the Backstreet Boys.

While the primary purpose of participating in the Ultimate Lip Sync Showdown is supporting the CAC, contenders are also competing for the Top Fundraiser, People’s Choice Award, Best Choreography, Best Costume and the highest of the honors, Fayetteville’s Ultimate Lip Sync Stars. Trophies and plaques are awarded to the winners.
The judges are Toni King, Tim Edwards, Victoria Hardin and Bill Bowman. The emcees are Michael Brash and Taylor Morgan.

“My favorite part is being able to watch the crowd’s reaction, who are giving up their time, coming together for such a great cause, and that’s for the children,” Adkins said.
Another feature of the event is the raffle. The prizes are a 55-inch TV, an iPad and a “weekend getaway in the ‘ville,” which covers a hotel stay and gift certificates to local businesses for a perfect “staycation.” Tickets are $5 or five for $20.

Adkins admires the generosity of the competitors. “They give up their time and their money,” Adkins said. “They don’t care if they don’t win. They just want to support a great cause.”

The Ultimate Lip Sync Showdown is March 21 at 6 p.m. Tickets are still available at the  Cape Fear Tix website. While tickets will be sold at the door if they are available, they have been sold out in years past, and Adkins recommends that tickets are purchased in advance.