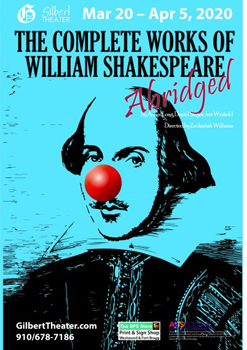 The health of members in our community is important. Due to the spread of the coronavirus, as a precaution, several events have been cancelled throughout the community. Please call to confirm events.

Whether you are intrigued by slapstick comedies or you appreciate Shakespeare’s works, a merger of the Bard’s plays and hilarity will have you in stitches and on the edge of your seat. “The  Complete Works of William Shakespeare, Abridged” will open at Gilbert Theater on March 27.

The play was one of the longest running plays in the West End, London’s theater district, ranking No. 20. It showed for nine years with more than 3,000 performances of the production.

Performing the show is a large feat. “It’s basically three guys who run through all 37 of Shakespeare’s plays in about an hour and forty-five minutes. As you can imagine, it tends to get a little silly,” Artistic Director Lawrence Carlisle III explains.

Wesley Wilburn, Chris Walker and Matt Gore make up the cast. Walker, aside from his acting resume in other cities, has performed in several plays at the Gilbert, including “The Laramie Project,” “Cat on a Hot Tin Roof” and “A Secret Garden.” Wilburn was in the Gilbert’s Glee program. This is his first lead role in a main stage show. He was in “It’s a Wonderful Life” two years ago. The show is Gore’s Gilbert debut, although he has performed in Goldsboro at the Neuse Little Theater and Theater in the Park in Raleigh. He’s been in shows with Center Stage Theater as well.

Due to the amount of Shakesperian ground to be covered in conjunction with a small cast, the production is zany and off-the-wall.

“The show is kind of meta in that they talk to the audience quite a bit,” Carlisle explains. “Each of the actors is playing a fictionalized version of themselves. When it was written, it was written by three guys and the characters are just their names. But then they go through each of Shakespeare’s plays with each of them playing multiple roles even if it’s only for a moment. Think Monty Python doing Shakespeare. It’s hysterical.”

There is no real set to speak of. Most of the story is told through acting and quick costume changes.

Carlisle looks forward to the community seeing the play because he feels that it fills an important need. “With everything going on in the world right now, I think maybe people need to take a break and just enjoy some silliness,” he said.

“We’ve been rehearsing close to three weeks, and I laugh every night at rehearsal and I’ve seen them doing it every day. They still manage to make me laugh.”

The show runs at the Gilbert Theater from March 27 to April 12. Tickets can be purchased online at https://www.gilberttheater.com/ or by calling 910-678-7186.