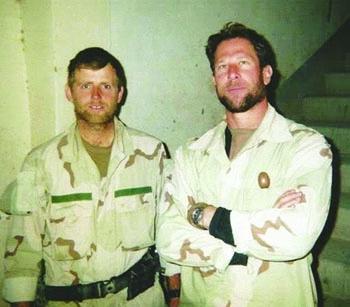 Following the attacks of September 11, 2001, a 12-man team of U.S. Army Green Berets inserted deep in northern Afghanistan to aid local partisans in their unconventional war against the Taliban.

Working with officers from the CIA, the Special Forces soldiers helped raise an army of some 5,000 Afghans, in a campaign across some of the most inhospitable terrain in the world.
Over a course of two months, the Green Berets advised Afghan commanders and directed a massive air campaign to rout the Taliban from power. It was the most successful unconventional warfare campaign in modern history.

The Americans were dubbed “The Horse Soldiers” by western media reporting on their triumphs. The team’s exploits have been portrayed in the Hollywood movie “12 Strong,” the Emmy-nominated documentary “Legion of Brothers” and various books and monographs.

A monument to their honor, “America’s Response Monument,” was erected at Ground Zero in New York City, where it is viewed by thousands daily.
The newly published book, “Swords of Lightning,” is their story, told from their point of view for the first time, with never-before revealed details and insights of the campaign, their struggles, and how close they came to failure and death.

This story, as written by the Horse Soldiers, has never been told directly by the men who shared the experience first-hand. It has been dubbed a must read for all interested in history and war.

On June 15, from 6 p.m. to 8 p.m. the public is invited to hear their story and enjoy a Horse Soldier® Bourbon tasting and specialty cocktails at a fundraising event hosted by the Airborne & Special Operations Museum Foundation at the U.S. Army Airborne and Special Operations Museum. Admission to this special event includes a presentation by Operational Detachment Alpha-595 team members Mark Nutsch and Bob Pennington, along with author Jim DeFelice, and a signed copy of “Swords of Lightning.”

Mark Nutsch, a former U.S. Army Special Forces Major, is a Kansas native. Nutsch served for 24 years in the Army, as an infantry, 75th Ranger Regiment and Special Forces officer with unique combat and leadership experiences. As America’s response to the attacks of 9/11, then-Capt. Nutsch led one of the first “Task Force Dagger” combined teams of CIA, Special Forces A-team (ODA-595), and Combat Controllers into northern Afghanistan.

Advising the armed resistance leadership against the Taliban and al Qaeda they spearheaded unprecedented Unconventional Warfare operations, while mounted horseback. The “Campaign for Mazar-e Sharif” resulted in the liberation of six northern Afghanistan provinces within weeks. Recognized as the catalyst for the collapse of the Taliban regime and expanded pursuit of al Qaeda terrorists. He is currently involved in efforts to evacuate American citizens and his team’s Afghan allies, aiding their resettlement.

Featured in various books, museums and as a guest speaker. Nutsch, his wife, and the ODA-595 team are featured in the Emmy-nominated documentary film “Legion of Brothers.” Nutsch is portrayed by actor Chris Hemsworth in the feature film by Jerry Bruckheimer Studios entitled “12 Strong.”

Pennington has written military doctrine, as well as lectured and consulted on film, books and military monographs. He was recently inducted as a Distinguished Member of the Special Forces Regiment and the Georgia Military Veterans’ Hall of Fame. He is the recipient of many combat and peacetime awards, to include the Legion of Merit, Bronze Star Medal with Valor Device and two oak leaf clusters. Pennington is a recipient of the 2018 MG Shachnow Award (special recognition for combat actions), and the 2014 Bronze Order of Saint Philip Neri (20 plus years outstanding achievement in Special Forces). He also received a Special Commendation from the Governor of Georgia and honored through a State Resolution by the Georgia House of Representatives for his military service. He is a lifelong member of the distinguished Office of Strategic Services Society.
Pennington, Nutsch and their business partners operate a nationally growing, whiskey distillery brand, Horse Soldier Bourbon at American Freedom Distillery, featuring their double gold award-winning Horse Soldier Bourbons.

Jim DeFelice is author or co-author of 16 New York Times bestselling books, including “American Sniper” and “Everyman a Hero.” He has written over 50 fiction and non-fiction books. Among his recent nonfiction works are “Every Man a Hero”, a memoir based on the World War II service of combat medic Ray Lambert. The book won the 2019 Army Historical Foundation Distinguished Writing Award. An international blockbuster with over 5 million sales, “American Sniper” (2012) detailed the life and service of Navy SEAL Chris Kyle. Made into a record-breaking blockbuster movie of the same name in 2015 starring Bradley Cooper and directed by Clint Eastwood. “Sniper” was followed by two more New York Times best-selling nonfiction works, and a limited television series movie based on “American Wife” (2015) with Taya Kyle is under development in Hollywood with DeFelice as a consulting producer. His work in video games includes “Afro Samurai: Revenge of Kuma” and “Ace Combat: Assault Horizon,” the number one selling air-combat franchise in the world. A winner of the Army Historical Foundation Award for his writing, he lives in the Hudson Valley.

Tickets to the fundraiser are $75 per person/ $125 couple, and include a bourbon tasting, appetizers, presentation by members of ODA-595 and a signed copy of “Swords of Lightning,” while supplies last. The first 10 who reserve a spot will also receive a custom Horse Soldier® Bourbon glass.

For event and ticket information, contact the Airborne & Special Operations Museum Foundation office at 910-643-2778 or visit the event website at https://shop.asomf.org/whiskey-and-war-stories.