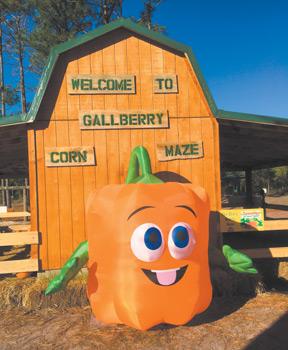 After a brief delay caused by Hurricane Florence, the popular Gallberry Corn Maze is back and better than ever at 5991 Braxton Road in the Gray’s Creek community.

The last tickets go on sale an hour before closing time each day. Admission is $10 per person ages 3-65. Military, county school employees and senior citizens 65 and older get a $1 discount. Groups of 20 or more also get a $1 discount.

The admission fee covers basic entrance to the corn maze and children’s maze plus a host of activities, McLean said. The list includes a hay ride, barrel train ride, jumping pillows, interaction with farm animals including maze mascot Mr. Hee Haw the donkey, a double barrel tube slide, the giant fort over the double sand- box, and a corn shack with 6,000 pounds of corn to play in.

One activity that comes with extra charge is playing with air cannons that shoot tennis balls.

There is one new activity called rat rollers. McLean described it as huge corrugated plastic tubes that children get inside. They then navigate down a track made of plumbing pipe. “They work together, race down the pipes and turn around and roll back,’’ she said.

The rat rollers is included in the general admission price.

There is also a full concession stand featuring a variety of special items including things like fried corn on the cob, fried Oreos, fried honey buns and family-sized s’mores packs for the maze’s fire pit.

A final decision hasn’t been made, but McLean said it’s likely the maze will be kept open an additional week to Nov. 11 since the opening was delayed by the hurricane.

“We think the crop will hold up,’’ she said. They use sorghum instead of corn, and McLean said it generally stays greener than corn longer.

For folks who are concerned about the mosquitoes that have descended on the area since the hurricane, there will be insect repellent available on-site, but spectators are encouraged to bring their own as well in case the problem continues.

“Once it turns cooler, we won’t have a problem,’’ McLean said of the mosquitoes.