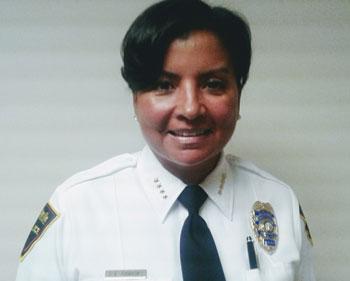 Fayetteville Police Chief Gina Hawkins gave city council her first crime update report last week. She said she continues to evaluate the department of 433 officers with emphasis on the redeployment of personnel to “enhance operations and provide maximum resources based on the needs of the community.”

Hawkins wants to form a community affairs office to increase residents’ engagement and improve communications. She has said she was impressed on her arrival from suburban Atlanta with the community involvement she witnessed here. When asked by City Councilman Larry Wright if she would favor the establishment of a civilian police review board, Hawkins was hesitant but indicated she was confident the department doesn’t need one. The idea has been floated in years past in the wake of allegations of racial profiling by police.

The chief also said she hopes to intensify efforts to combat the opioid epidemic. Fayetteville has been identified as having a serious problem, although community efforts championed by outgoing mayor Nat Robertson have reduced it. In her crime report, Hawkins noted that drug enforcement efforts yielded a significant reduction in seizures of cocaine and marijuana. But cases involving heroin and fentanyl have increased; heroin by 127 percent over last year. Fayetteville patrol officers were among the first in North Carolina to be equipped with naloxone, which is sold under the brand name Narcan. It’s a medication now available as a nasal spray, which is used to block the effects of opioids, especially in overdose situations. Hawkins told city council that her officers have saved more than 100 lives, 75 this year alone, by administering Narcan to opioid overdose victims.

Councilman Jim Arp wanted to know why police can administer naloxone and Fayetteville firefighters cannot. Firefighters are first responders who often arrive on the scene of medical emergencies first, but the fire chief has not authorized the use of Narcan. All city firefighters are trained EMTs. Brian Pearce, Cape Fear Valley Medical Center emergency medical service director, told Up & Coming Weekly for an earlier article that “All (the fire department) would have to do is work with us to come up with a plan and protocols for administration and education. Then we would update the county EMS plan, and they would be allowed to administer naloxone.” Pearce administers regulations of the county’s medical examiner.

Chief Hawkins told council she was surprised to learn that the FPD doesn’t have a gang unit, although ranking officers have developed an expertise in the field.

As for the crime rate, there are plusses and minuses. The homicide rate is down a bit over last year, which set an all-time high record of 31 violent deaths. Through the end of September, 23 homicides were investigated. Overall, crimes against persons are about the same as last year. Property crimes are down by 2.7 percent. Motor vehicle thefts are up 15.7 percent.

Car crashes continue to get the attention of police. There have been 15 fatal wrecks so far this year, compared to 14 during the corresponding period of 2016. Speeding continues to be a major contributor to motor vehicle crashes.