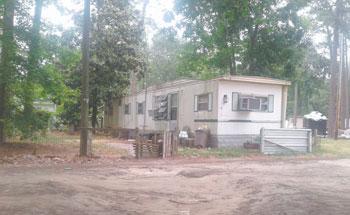 Life is getting back to near normal at Fayetteville’s Mobile Manor mobile home park in Bonnie Doone. Electrical power will likely have been fully restored to all occupied trailers by week’s end. Many of the homes were hooked up late last week, and the only garbage dumpster serving the park was emptied. It was overflowing when code enforcement officers responded to an anonymous tip about dangerous electricity problems at a dozen trailers late last month.

They found what officials described as “an imminent threat to life and property.” Duke Energy disconnected power at the single electricity meter that serves as the point of delivery at the park. City officials said inspectors found about a dozen instances of life-threatening hazards at occupied trailers after getting an anonymous tip April 24.

Assistant City Manager Jay Reinstein said 37 families occupy the 45 trailers in the park. City police hand-delivered letters to residents the night before the power was turned off. “The information process should have started much earlier,” said Fayetteville City Councilwoman Tisha Waddell. She added that residents could have been alerted at the same time trailer park managers were told in April that they had to fix the problem or their power would be turned off.

“We’ve been dealing with concerns out there for a long time,” said District 4 Councilman D. J. Haire. City manager Doug Hewett noted that code enforcement violations, which he called “deplorable,” had been levied against property manager Sheila Monsour previously. He said emergency vehicles would be unable to negotiate a bumpy, virtually impassable dirt road that winds through the property.

The main meter is located on the lot of Army veteran Dewey McLamb. He showed a receipt book where he had paid his $150 monthly lot rent two months in advance. McLamb has lived at Mobile Manor mobile home park for nine years and subsists on a VA disability benefit and Social Security.

Absentee owner Portia Covington of Glen Allen, Virginia, said she and her sister, Valerea Russ of Fayetteville, took ownership of the property last year. Since then, Covington said, she has tried repeatedly to get Monsour to make property improvements. Monsour has the management lease on the trailer park and has for years.

City records indicate that Mobile Manor has been cited 219 times for code violations since 2010. Four fines of $200 each were levied since March of this year.