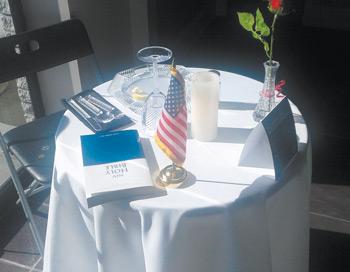 Last year during the November Heroes Homecoming observance, dozens of symbolic Missing Man Tables were set up around Cumberland County. The Fayetteville Area Convention and Visitors Bureau provided 160 display kits for tables. This year, FACVB is again asking that Missing Man Tables be set up Nov. 1-12. Table kits are provided at no cost to businesses and other public organizations. The tables are designed to honor Americans missing in action during warfare.

About 73,000 World War II men and women remain unaccounted for. From the Korean conflict, 7,763 military men are missing, and more than 1,600 are missing from the Vietnam War. It’s estimated that more than 85,000 Americans have not come home from war.

For Missing Man Tables, designated symbolic items are placed on small round tables along with table tents that explain what the items depict. The kits and instructions will be available at the FACVB center on Person Street the last week of October.

Cool Spring Downtown District, Inc. has announced that Tony Chavonne has been named interim president and CEO of the organization. Chavonne will serve in this volunteer capacity while the District Board of Directors recruits a permanent executive. Mark R. Regensburger resigned in July.

Chavonne will lead the organization in implementing innovative art and entertainment programming for the culturally, economically and racially diverse communities in and around the district while continuing the organization’s work to strengthen economic vitality downtown, a news release said.

Chavonne is a lifelong resident of Fayetteville. He lives in the downtown district. He served as mayor of the city of Fayetteville from 2005 to 2013. He has served in civic affairs for many years.

Fayetteville State University and Fayetteville Technical Community College have signed an agreement that will allow FTCC graduates to complete online bachelor’s degrees at FSU at a cost not to exceed $10,000 in out-of-pocket expenses. The agreement was signed by FSU Chancellor James Anderson and FTCC President Larry Keen during the FTCC Board of Trustees meeting.

The city has launched a new webpage for public record requests that it says will make the process easier and more efficient. Citizens can visit the city of Fayetteville website at Fayettevillenc.gov, scroll over “How Do I” and click on “Request A Public Record.” Records available include police and fire department reports. There is also a “Records Available Online” button on the Transparency and Accountability page where users can view and download available documents.

“It is the right of citizens to request and view records, and with the help of ... the new public records webpage, they now have better access to them,” said City Manager Doug Hewett.

New features will not only make the entire process easier for the requestor but will allow city staff to more efficiently and effectively fulfill each request – no matter how complex. Making information available via the new webpage saves taxpayers money and time, as residents no longer need to go to a city office to obtain information.

The North Carolina Department of Public Instruction has awarded Cumberland County Schools a $401,100 grant to fund its Mental Health Support Personnel program. Local officials say the money will be used to improve efforts to reduce school violence and increase the wellbeing and mental health of students. The school system says the grant will fund development of school-based care review teams comprised of school nurses and counselors. The teams will provide support of the district’s Student Services Department.

“The continued generosity of the citizens of Cumberland County has been overwhelming and very humbling,” Warren said.

“Foster care is something that is close to our heart, and after multiple years of being able to be a blessing at Christmas, this was just the logical next step,” said Mark Knight, lead pastor at Epicenter Church. Donations in support of the school shopping spree are appreciated. Information is available online at www.yourepicenter.com.