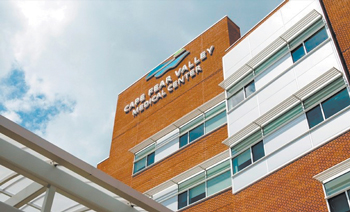 There are hundreds of conditions that can affect the brain, such as concussions, strokes and tumors. Cape Fear Valley Neurosurgery provides comprehensive treatment and surgery right here in our hometown. Dr. Charles Haworth, medical director of Neurosurgery at Cape Fear Valley, says the hospital provides neurological and neurosurgical treatment and support for patients in a six-county region of Southeastern North Carolina, including Fayetteville, Fort Bragg, Hope Mills, Raeford, Lumberton, Elizabethtown, Lillington, Dunn, Clinton and beyond.

Haworth recently recruited neurosurgeon Dr. Melissa Stamates who came to Fayetteville from the Midwest. Stamates graduated with honors from The Ohio State University in 2011. She served a seven-year medical residency at the University of Chicago followed by a fellowship at North Shore University Health System in Evanston, Illinois. Stamates has more than nine years of diverse experience in neurosurgery. In the U.S., neurosurgery is a highly competitive specialty composed of 0.5% of all practicing physicians.

Stamates and her husband arrived in Fayetteville in July of last year. She and Haworth alternate surgical rounds daily. Her special interests include surgery to treat brain cancer, pituitary tuimors, cranioplasty and other general neurosurgical diseases and illnesses.

Both physicians said they wanted to be doctors when they were young. Haworth is a North Carolina native. He graduated from Guilford College and Duke University School of Medicine and has practiced medicine for 38 years. He practiced at Southeastern Regional Medical Center in Lumberton before coming to Fayetteville six years ago. He practiced three years in the Navy followed by Duke Hospital in Lumberton and Cape Fear Valley for the past six years.

Stamates told Up and Coming Weekly she hopes to build her career here. Cape Fear Valley’s need for stability in neurosurgery is a priority. Haworth’s challenge is building a program large enough to provide coverage 24/7. Haworth said a third neurosurgeon will likely be hired soon. “There will always be a need in our community for what we do,” he said.

Stamates said the need and new facilities make launching her career in Fayetteville exciting. A new five-story building for Cape Fear Valley’s residency program will house a neuroscience institute on the fifth floor.

Asked what Stamates enjoys most about her work, she said she is the happiest “when my patients do well.”

Both doctors spoke of the chemistry they have. Reliance on one another is what makes the relationship click Haworth intimated.

The approximately $28.3 million building project includes the demolition of an older building, which is underway. The driveway on the Melrose Road side of the hospital campus has been closed because of the construction project. The building is scheduled to be completed in May 2021, Medical Center spokeswoman Janet Conway said.