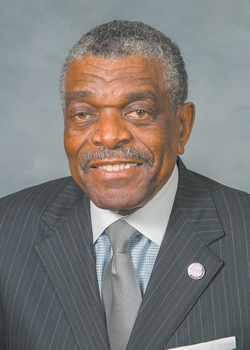 North Carolina Rep. Elmer Floyd’s Democratic Primary defeat this month was a shocker for many. He was one of only two incumbent legislators who lost their seats in the March 3 election. Floyd, 77, a retired city of Fayetteville Human Relations director, has served in the legislature since 2009. He was seeking his seventh consecutive term in the 43rd House of Representatives District. He lost to Kimberly Hardy, 48, a professor at Fayetteville State University, who has lived in Cumberland County for four years. A political unknown, she won 54% of the vote and will face Republican Diane Wheatley, 68, a former Cumberland County commissioner and board of education member.

A realigned 43rd District was disadvantageous to Floyd but could be advantageous for Wheatley, a prominent Republican. It covers all of Cumberland County east of the Cape Fear River and the Linden area, plus precincts in eastern, central and southern Fayetteville.

Wheatley lives in Linden, north of Fayetteville. Demographics of the territory give her a chance of winning the seat because more Republican voters live there now. Overall, the district is a mish mash of Republican and Democratic voters. Wheatley and Hardy will meet in the November general election.

The district map was revised last year because the court found it to be an unconstitutional partisan gerrymander. Many of the voters in the new legislative district were unaware that the district map had been redrawn. They were no longer represented by Rep. Billy Richardson, D-Cumberland, and were being asked to elect a candidate they didn’t know. Richardson won the primary in his new district.

Floyd was one of only three House Democrats who initially voted for Gov. Roy Cooper’s budget bill last June, which had Republican support except for Cooper’s insistence that Medicaid expansion be included. Floyd said he supported the budget because of the millions of dollars included for Cumberland County projects. He had been encouraged to cross over by Rep. John Szoka, R-Cumberland.

Hardy stressed her support for Medicaid expansion, which Republicans would not support. The controversial bathroom bill also came into play. Floyd faced criticism for voting for House Bill 2, vehemently opposed in the African American community. He later supported the partial repeal compromise. Hardy made LGBT rights a key element of her campaign. She won an endorsement from the advocacy group Equality NC.

Both candidates raised relatively small amounts of money in the primary. Campaign finance records show Floyd raised $36,200, much of which he spent on television commercials the last two weeks before the primary. Hardy raised about half what Floyd did. She said her grassroots campaign of attending community events, meeting voters and promoting her message on social media made the difference. “You can’t know anybody until you’ve gone out into the community,” she told the News & Observer of Raleigh. The old fashioned, yet always effective, grassroots campaign is door knocking, telephone calling and personally identifying who will vote for you.