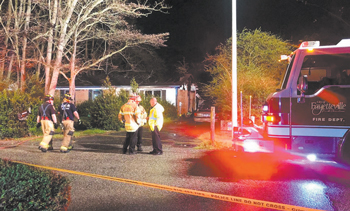 Two children and an adult died early March 19 in a house fire on Portsmouth Drive in West Fayetteville. Firefighters were dispatched to the home in the 6400 block of Portsmouth off Bunce Road just after 2 a.m., according to a fire department statement.

The first unit on the scene reported heavy fire visible from the one-story house. Dispatchers had indicated residents were trapped inside. When a fire crew searched the home, they found two young brothers, ages 5 and 9, and their 30-year-old mother had died. Three other family members — including cousins of the deceased — escaped the blaze, a family member said.

Fayetteville Fire Chief Mike Hill said scenes like this are difficult for firefighters. “We have our own ways to cope, but it’s something that never goes away,” Hill said.
Fire and police department investigators continue to probe the blaze. Bunce Road connects Raeford Road and Cliffdale Road in 71st Township. The event was the first fatal fire in Fayetteville since 2018.

North Carolina has been facing limits on coronavirus tests since the outbreak began, but officials are saying the testing capacity is expanding. Dr. Mandy K. Cohen, Secretary of the North Carolina Department of Health and Human Services explained earlier this month that work is being done to increase testing. More than 500 people in the state have been tested, she said. The numbers are incomplete and include only tests done by the state lab and LabCorp that have revealed positive results. Other private companies are testing, but they are required to notify the state only of positive results, not total tests performed.

Gov. Roy Cooper said testing is a priority for his administration, and he wants the state to get complete totals from private contractors.

Cohen said she hoped to announce community testing sites in the coming days, including drive-thru sites.

The 38th annual Fayetteville Dogwood Festival scheduled for the weekend of Apr 23–26 has been canceled because of the coronavirus pandemic. The Cape Fear Regional Theatre has canceled remaining performances of “Murder for Two” plus the show scheduled for April.

The Fayetteville Arts Council Fayetteville/Cumberland County in downtown Fayetteville and the Airborne & Special Operations Museum have been closed to the public until further notice.

Interested residents are encouraged to check the Arts Council website at theartscouncil.com for the latest information about its events and scheduled programming.
At the ASOM, all scheduled events, including Vietnam Veterans Day, Ed Stever Day and the Easter egg Hunt, are canceled. Tickets for the Easter egg Hunt have been refunded. Both facilities will continue to keep the public informed through social media and their websites.

Fayetteville Technical Community College has shifted classes to online instruction. FTCC athletics and other college events are suspended at this time. FTCC already has about 7,000 students enrolled in courses that are entirely online and has provided all-online instruction to other students over the past two years.

“We’re experts at this,” FTCC President Larry Keen said. “We’re still going to expect higher-education activities to take place.” The college has suspended all official travel outside of Cumberland County.

The Fayetteville Public Works Commission has approved a 4.7% decrease in time-of-use electricity rates for residential customers beginning May 1, 2020. The board action reduced the off-peak electric rate per kilowatt-hour from 9.1 cents to 8.4 cents.  Off-peak rates apply most of the time during an average week. The decrease applies to electric usage outside of the 6-10 a.m. peak hours during the winter, and 3-7 p.m. period during the summer.

A typical PWC residential customer, using 1000 kilowatt-hours per month, should see bills drop $5.20 after May 1. PWC’s electric time-of-use rates began in 2019 as an effort to reduce peak demand when the cost of electricity from PWC’s wholesale power provider, Duke Energy, is the highest. The rate reduction comes after a renegotiation of PWC’s contract with Duke Energy, which provided $33 million in savings beginning January 2021.

“PWC is not-for-profit and we are able to take the savings of the new contract and give it back to rate payers, instead of shareholders,” said Evelyn Shaw, PWC chairwoman.

Fayetteville Area System of Transit Director Randy Hume hopes to acquire four new electric buses using grant money specifically allocated for them. Hume describes it as a means of updating public transit service that will help move the city in a positive direction. He says he will submit an application to the Federal Transit Administration for the grant and should receive notification by the end of summer. Hume noted it is a competitive, process as most FTA grants are, but that based on the established criteria, he believes the city has a good chance of winning approval.

Mayor Mitch Colvin said the city could save nearly $160,000 annually in fuel costs and more than $81,000 annually on bus maintenance. “This is just one of many examples of what city staff and your council are doing to make our city ... move in a more environmentally-friendly direction,” Colvin said.

Proterra electric buses come with a price tag of nearly $600,000 each. Proterra has an east coast manufacturing facility in Greenville, South Carolina.
How to resolve AdBlock issue?
X