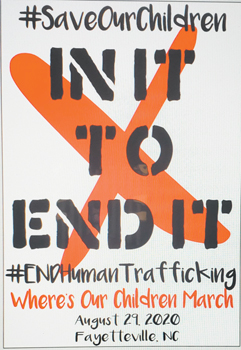 North Carolina consistently ranks within the top ten states for most reported human trafficking cases, according to the NC Human Trafficking Commission. In 2019, there were 713 charges of human trafficking and other offenses of a similar nature across the state.

To bring awareness to the on-going issue, local advocates Sabrina Paul and Emily Dean organized a local Human Trafficking March scheduled for 5–7 p.m. on Aug. 29. The march will begin and end at the Cumberland County Sheriff’s Department at 131 Dick St. in Fayetteville.

“We are trying to raise awareness on how prevalent human trafficking and pedophilia really is,” Dean said. “Fayetteville is a hub for human trafficking because it’s a halfway point between Miami and New York. It serves as a drop off point, where exchanges are made. A lot of people just don’t know about it.”

According to the Cumberland County Sheriff’s Office, from 2015 to the end of July this year, there have been 254 cases in the county resulting in 83 misdemeanor charges and 153 felony charges.

New York, Miami, Atlanta, Washington, D.C. and Charlotte are all considered major east coast hubs for human trafficking. These cities are connected by interstates which facilitate the movement of human trafficking victims. The geographic location of North Carolina contributes to the high number of victims and survivors living in the state.

In January, Governor Roy Cooper issued a proclamation declaring it Human Trafficking Awareness Month. The proclamation said that although awareness is growing, human trafficking continues to go unreported or underreported in part due to its isolating nature, the misunderstanding of its definition and victim fears of coming forward.

“No little girl or boy has the dream of ‘I want to grow up and sell my body,’” said Sgt. Patrice Bogertey.

“It’s hard to get victims to go forward in trial,” she said. “Prosecution takes so long.”

Bogertey added that the stigma of being a sexual assault victim coupled with the agony of retelling their story can take its toll on survivors of human trafficking.

“It’s hard enough to tell a detective, but then to have to go to court, and now they have to talk about it in a court room,” Bogertey said. “It’s embarrassing for victims, it shames the victim.”

The stigma is compounded by the fact that many victims are forced into drug dependency by their captors and forced to participate in other crimes, she said.

Bogertey said an organized march is a great idea to raise awareness.

“The public as a whole has to pay attention, to start watching for signs,” she said.

March organizers Dean and Paul were moved to organize the event to raise awareness, but also said they hope to encourage victim advocacy and influence lawmakers to make penalties for traffickers more severe.

The event will begin with featured speaker Beverly Weeks, the executive director of Cry Freedom Missions, a non-profit organization fighting to eradicate sex trafficking. After the march through downtown, a few survivors of human trafficking will be given an opportunity to speak. Organizers have also invited local officials to attend the event.

“Our goal is to create awareness first,” Paul said. “The long-term goal is to stop this [human trafficking] and shut down organizations trying to normalize pedophilia.”

“ We hope for change in the long run.”

If you would like to report information about a trafficking situation, contact the National Human Trafficking Hotline: Call 1-888-373-7888 or Text 233733. Anti-trafficking advocates are available 24/7 to receive tips about potential trafficking situations and connect survivors of trafficking to services and support. All reports are confidential and callers can choose to remain anonymous.