Now what? A conversation with Spring Lake Mayor Kia Anthony 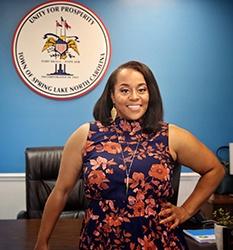 As a two-tour combat veteran, Kia Anthony says the one adage that reverberated throughout her seven-year military career was: “If not you, then who?”

Anthony never wanted to be a mayor, much less a politician. Seeing what was happening in her adopted town and her desire to be a public servant pushed her to seek political office. She prayed about it and was given the go-ahead, she said. Also, as Anthony explains it, her mother – who often fed and clothed the less fortunate – instilled in her the DNA of public service.

The Flint, Michigan native joined the Army in 1999, right out of high school. First, the Army sent her to Korea, then to Fort Bragg’s 44th Medical Brigade. Despite her multiple deployments and temporary assignments to other places, Fort Bragg and Spring Lake became her home.

She knew little about the details of Spring Lake’s financial woes before running for town mayor in 2021.

“I knew to the extent citizens were allowed to know,” she said. “And that was one of the reasons I felt I needed to run.”

Although a newcomer to Spring Lake politics, she ran against two strong incumbents: former Alderwomen Fredericka Southerland and Jackie Jackson. Anthony said she didn’t have to do too much convincing because the voters were ready for a change.

Anthony says she never directly ran against Southerland and Jackson; instead, she ran against the status quo, and her campaign message promised a “new standard” in town government. She placed campaign signs both in and outside Spring Lake town limits to ensure name recognition.
Anthony officially became a Spring Lake resident in 2004.

“I bought my house here.”

She has seen the town’s decline, in part because citizens played a minimal role in the town’s governance.
Anthony said she has multiple goals that could help revive Spring Lake’s economic vibrancy.

“The main thing is to tackle our finances. We’ve made extreme headway in getting our finances in order. The budget is actually looking good,” Anthony said.

Anthony chairs the Town’s Audit Committee, which is tasked with triaging the recommendations from the 2021 State Auditor’s investigation into the town’s finances. Other members of the committee include Alderwoman Sonja Cooper and Alderman Raul Palacios. Staff members on the committee include Interim Town Manager Joe Durham and a Town Finance Department employee. Anthony may add a citizen as an ad hoc member.

The meetings are open to the public, she said.
Anthony said other goals include relating to younger citizens. Spring Lake’s median age is 24.9, and Anthony believes it necessary to reach that demographic stratum through citizen engagement.

She also listed business infusion, calling Spring Lake a “diamond in the rough” that is perfectly positioned.
Another goal for Anthony is getting Spring Lake’s infrastructure up to acceptable standards.

“We can’t bring in a movie theater, or a bowling alley, or even another housing development other than the two we have coming in right now. Our water and sewage can’t sustain that kind of capacity.”
Recently, the state Local Government Commission, which currently oversees the town’s finances, approved the town’s application for a grant to rebuild its water/sewer infrastructure.

“Once we do that, we can think about revitalizing our main street,” she said.
Before thinking about becoming mayor, Anthony said she worked to re-establish the Town’s Chamber of Commerce. She calls that project “critical in injecting life into the business community.”
The departure of Pope Air Force Base and the undertaking of a North Carolina Department of Transportation bridge construction to facilitate I-295 crippled downtown Spring Lake.

“We lost almost 40 businesses during the creation of that bridge. This also divided Spring Lake traffic. It devastated us here in Spring Lake,” she said.
The town also lacks affordable housing. Anthony explained that a current housing development on Odell Road consisting of 122 new 2023-model mobile homes is a start.

As one of three military veterans on the board, Anthony believes Spring Lake lacks proper military engagement. “That is huge for us here in Spring Lake. We are very connected to the military. We have a high veteran population, and we want to make sure they are serviced, and not only veterans but also active duty military and their families,” she said. “We don’t connect with Fort Bragg as we should even though Spring Lake is the gateway to Fort Bragg. We should be proud of that, and we should capitalize on that,” she said.

Finally, Spring Lake needs to work on its appearance, she said. The town has an active Appearance Committee chaired by Southerland.

“We are all working diligently cleaning up Spring Lake. It’s a priority of all of the board members,” she said.