Excitement is Blooming at the Fayetteville Dogwood Festival 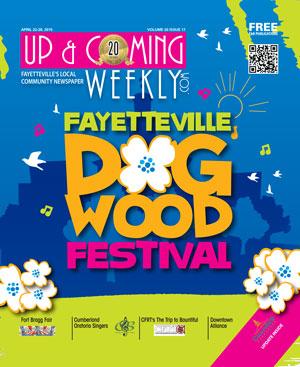 Excitement is blooming in the community for the upcoming Dogwood Festival April 24-26 in Downtown Fayetteville. The annual rite of spring is celebrating its 33rd year of bringing the community together for an action-packed, non-stop weekend of fun.

“Each year our organization works hard to produce a quality event for our community,” said Carrie King, the director of the event. “Just like Mother Nature, we too like to refresh the process each year to keep our event energized and vibrant! This year marks our 33rd year of fun, family and festivities. This time-honored Fayetteville tradition will continue to provide lasting memories and community pride for generations to come.”

If all goes as planned for this year’s festival, it will be another one for the books. The “unofficial opening of the festival” is at Cross Creek Park at 4 p.m., as the Boys and Girls Clubs of  Cumberland County welcome guests to their annual garden party, an official Dogwood Festival sanctioned event.

The Garden Party is an afternoon and evening of Southern tradition — dancing, entertainment, good food and friends. So ladies grab your favorite hat and guys, pull out your seersucker suits. Dress in your best summer chic attire for an afternoon of fun in support of  the Boys and Girls Clubs of Cumberland County.  This adults-only party features entertainment provided  by The (919) Band and beer and wine and heavy hors d’oeuvres powered by B&B Catering.

Tickets are $50 per person and are on sale at www.ccbgc.org or at www.facebook.com/ccbgc.org.

As evening falls, the fun transitions to Festival Park for the annual Bloom and Boom party that officially opens the event. The fun starts at 6 p.m. and ends with a fireworks finale at 10 p.m. Of course, there is a lot of fun in between as country comes to town with performances by Craig Campbell and Mo Pitney.

Campbell is one of country

music’s hippest neo-tradionalists. Growing up in rural Lyons, Georgia, Campbell is a proud reminder of one of country’s strongest creative periods. Becoming one of the most successful new artists of 2011, his debut album Craig Campbell spawned the hits “Family Man,” “Fish” and “When I Get It.” The second album, Never Regret (2013), climbed the charts with hits “Keep Them Kisses Comin’” and “Outta
My Head.”

At 20 years of age, Pitney’s deep baritone voice causes crowds to swoon. His sound is influenced by bluegrass artists such as Tony Rice and J.D. Crowe, as well as traditional and mainstream country. He has been named a 2015 hot country artist to watch by Billboard Magazine and one of the “15 Country Artists To Watch in 2015” by Huffington Post.

The midway is always a big draw at the festival with gates opening at 6 p.m. For $25  get all-you-can-ride wrist bands. Rides include the Freak Out, Screamer and Drop Tower. On Saturday and Sunday midway rides will be open during regular festival hours (midway will close at 7:30 p.m. on Saturday) and will operate on a ticketed system, tickets $1 each, on Saturday and Sunday.

Be sure to get a lot of sleep Friday night, as the Dogwood Festival kicks into high gear on Saturday, which will feature more than 100 arts and crafts, food vendors and fun activities for the whole family. One popular spot is The Partnership for Children’s KidStuff, which focuses on science this year. On Saturday, kids get a chance to meet Emmy-nominated Sid the Science Kid and UNC-TV’s own Frank Graff from the North Carolina Science Nowseries. On Sunday, the seriously silly Professor Gizmo will present his Fun and Science Show at 1:30, 3:30 and 5 p.m. Music and performances will continue throught the day at the Street Fair Stage and the Performance Stage.

On Saturday night, Festival Park will rock with performances by ‘80s bands Warrant and Quiet Riot.

At its core, WARRANT is an American rock band through and through. Their signature style of rock music is very catchy and yet very melodic. Hitting it big in 1989, the Hollywood, California based band rose through the ranks to multiplatinum selling, chart-topping success. Their debut album Dirty Rotten Filthy Stinking Rich and sophomore album Cherry Pie produced radio and MTV chart toppers “Heaven,” “Cherry Pie,” and “Uncle Tom’s Cabin.”

Remember some simple event rules to make your time at the festival more fun:

•No pets (except certified service animals)

•No weapons of any kind

•No bikes, rollerblades or skateboards

•No inappropriate language or behavior

Disabled parking will be designated in the Hay Street United Methodist Church parking lot and the Bank of America parking lots on Ray Ave. Availability is first come, first served.