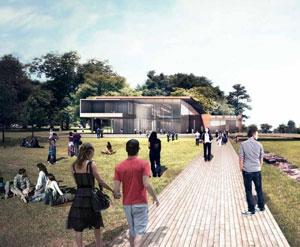 How do you turn a $15 million local government investment into a $65 million community asset?
Well, you get someone who realizes we are a low-wealth community with a scarcity of tax dollars. Then you give him the job of making a silk purse out of a sow’s ear.
That’s exactly what the Fayetteville City Council and Cumberland County Commissioners agreed to do. They unanimously pledged $7.5 million each toward the creation of the North Carolina Civil War History Center here in Fayetteville.
It’s not just a museum, says Mac Healy, president of the Civil War History Center’s board of directors. “It’s not just a battle story.” Instead, Healy said the center tells the story of how the Civil War and its immediate aftermath affected people’s lives. Healy made his remarks before the Cumberland County Citizens United February meeting.

Not a fan of taxes, Healy said he came to the project intrigued by the economic development opportunity. “Once built, we toss the keys to the state and we don’t pay another dime.”

The board of directors supporting this effort created a nonprofit organization. That allows them raise money to build the center. Healy acknowledged Cumberland County is a low-wealth community. Even so, before coming before local government for tax dollars, Healy and company made sure they had at least $5000 in private donations. The private fundraising effort continues.
Supporters expect the center to draw at least 120,000 visitors to Fayetteville every year. And, with the Airborne & Special Operations Museum and the Botanical Garden nearby, those visitors could stay longer; maybe even spend money on local fried chicken and lodging.
The county’s state legislative delegation also is on board, Healy said. “We started talking to the delegation four years ago.”
The Board hired a Raleigh lobbying firm to work on other state legislators. “We need to convince someone in Asheville to fork over money for a project in Fayetteville,” Healy said.

The state recently touted a $500 million in excess funds. Maybe with that kind of surplus, legislators wouldn’t mind putting the project into the state budget. That way, the state could allocate a little more than half of the total $65 million price tag over several years.
The cost breakdown for building the center on the grounds of the current Museum of the Cape Fear goes like this: Main Building (60,000 square feet) $24.8 million; Campus Development $10 million; Exhibits $11.8 million; Statewide Digital Outreach $2.8 million; Soft Costs $8.7 million; Four-year Operating Cost $1.9 million; Operating Endowment $5 million

The economic development part of this endeavor is great. How can you not like bringing 120,000 people with money in their pockets into Fayetteville every year? And how can you not support employing 200 people?

But also important is the Civil War History Center’s ability to enlighten us in great detail about the state and national impact brought on by a Civil War that claimed the lives of almost a million Americans. I have to mention that many from the North were recent immigrants.
The proposed North Carolina Civil War History Center will be like no other. It will serve as the state’s and the nation’s premiere Civil War era history resource. Digital technology will extend its reach throughout the state. The technology also will allow visitors to interact with the learning center.
Finally, this. The History Center plans to collect 100 stories about the Civil War from each of North Carolina’s 100 counties. In the end, the History Center hopes to have 10,000 stories about North Carolina people involved in the Civil War. These are stories handed down through the generations. They are stories sequestered in the archives of churches, or documented in the Bibles of families whose roots run deep in the Old North State.

If you have such a story about the Antebellum era, the Civil War or during the Reconstruction years following the war, contact www.nccivilwarcenter.org/share-a-story. If the story makes the grade, you get a free membership.