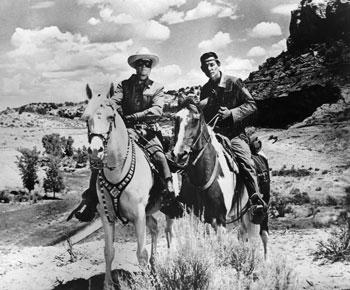 We are almost halfway through 2018. Just 50 short years ago, we were half way through 1968, which was one difficult year. The 71st High School class of 1968 and I graduated the day Bobby Kennedy was assassinated. Climb on board Mr. Peabody’s Way Back machine to waste three minutes of your time reading this column. Most Dook graduates, being slow readers, will lose five minutes of their life reading this stain on world literature.

To give you some perspective of how long ago 1968 was, consider that in 1968 the TV series “The Lone Ranger” had been in reruns since 1957. High school graduates in 1968 grew up watching the Lone Ranger, who was a bit of a time traveler himself. Who among us of a certain delicate age can forget the opening lines of the Lone Ranger bidding us to travel back into the past?

“A fiery horse with the speed of light and a cloud of dust, and a hearty Hi-Yo Silver away! With his faithful Indian companion Tonto, the daring and resourceful masked rider of the plains led the fight for law and order in the early West. Return with us now to those thrilling days of yesteryear.”

with the Lone Ranger, chasing bad guys. Some of you who came in late and are not yet calendar-impaired may not get the cultural importance of the Lone Ranger. Please stop reading this column and return to watching cat videos on your cellphone.

The Lone Ranger, played by the excellent Clayton Moore, was the sole survivor of a troop of Texas Rangers who had been bushwhacked by bad guys. The Lone Ranger wore a mask, roaming the West, bringing justice and capturing the lonely hearts of pioneer women who endured unrequited love for him.

He always rode away at the end of each episode, leaving a lovely lady pining for the handsome stranger behind the mask. It was an early version of “Fifty Shades of Grey.” At the end of each episode, after the Lone Ranger had solved the crime with the bad guys in the calaboose, someone would ask: “Who was that masked man?” A more knowledgeable someone would say, “It was the Lone Ranger.” The Lone Ranger would yell, “Hi-Yo Silver and away!” and ride off into the sunset. Fade to commercial.

Some unkind critics said the Lone Ranger loved his horse, Silver, more than he loved the ladies. Not so, he was just too busy fighting bad guys to settle down on a ranch with a good woman. Fighting for law and order in the early West was a full-time job. His faithful Indian companion, Tonto, was played by Jay Silverheels, who was a Canadian Indian. Tonto’s job was to be the Lone Ranger’s sidekick, chasing bad guys or hanging out by a ranch or in a box canyon, waiting for the bad guys to show up. Mostly, Tonto would get captured and beaten up. Then the Lone Ranger would save him. Less frequently, Tonto would rescue the Lone Ranger from the guys in black hats. It was clearly a politically incorrect TV show.

It culturally misappropriated Native American culture by making Tonto the Lone Ranger’s flunky. Tonto always called the Lone Ranger “Kemosabe,” which some amateur linguists said meant “Dumbo” or an even worse insult that is not printable in a family newspaper.

In addition to plugging bad guys, silver bullets are very useful in killing werewolves. While the TV series never showed the Lone Ranger fighting a werewolf, the possibility remains that the Lone Ranger might have been born in central Europe, where werewolves were quite common.

One can never be too careful about werewolves. Gentle Reader, even you might become a werewolf, under the right conditions. Remember the ancient chant: “Even a man who is pure in heart/And says his prayers by night/May become a wolf when the wolfbane blooms/And the autumn moon is bright.”

If your significant other has recently purchased a magazine of silver bullets, buy a Kevlar vest and do not go outside during the next full moon. The life you save may be your own.

Hi-Yo Silver and away!