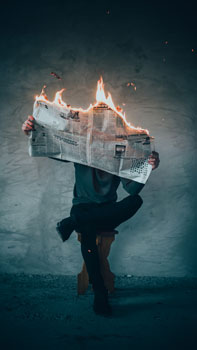 The decision to demolish the old Christ Episcopal Church Parish House for less than $7,800 demonstrated the common sense and prudent leadership of the newly elected commissioners of Hope Mills. Commissioners Pat Edwards, Bryan Marley and Kenjuana McCray prevailed as they rebuffed the efforts of Commissioners Jerry Legge and Jessie Bellflowers in their attempt to restore the 110-year-old building for a whopping estimated price tag of over $300,000 of Hope Mills taxpayers’ money. Over the years, even with numerous repairs, additions and building modifications, it was difficult to identify much of anything that could  be documented or classified as significantly historical about the building.

This being the case, the commissioners demonstrated the kind of logical thinking and visionary decision-making that will move Hope Mills positively into the 21st century. Tough decisions are rarely ever popular, no doubt about it. In this case, three Hope Mills commissioners evaluated the facts, completed their due diligence and made a decision based on what was best for the town and its residents. That’s leadership. And, that’s what they were elected to do.

They will undoubtedly experience boisterous pushback from distractors in the form of personal attacks, criticism, protests and whiney social media posts. However, with Hope Mills having 16,000+ residents, a dozen or so malcontents demonstrating this kind of behavior is mostly inconsequential. Unfortunately, it has become more and more prevalent with the reckless popularity of social media compounded by the inability of the news media to wean itself away from the temptation of creating “fake news.”

I have written many articles about my disappointment with today’s media and journalistic community, especially when so many of them disseminate, create and report fake news. Fake news is not only defined as creating and reporting things that are not true. It is misrepresenting or eliminating known facts to add drama to a story, cause or personal agenda. Fake news is also when only one side of the story is told, depriving the public of facts they need to understand an issue or situation at hand.

This was the situation recently when The Fayetteville Observer and WTVD-11 both ignored major facts and circumstances influencing the ultimate decision to demolish the Parish House. They chose the easy route and focused only on the sympathetic protesters and Jessie Bellflowers’ disappointment over the decision to demolish the building. They covered the story without any mention of the actual time and energy that the board invested in doing the appropriate due diligence on the project. The Parish House has no significant historical value. Estimated revitalization cost is $300,000+.  One hundred forty-thousand dollars plus must be paid up front just to stabilize the building before anyone can safely enter to get a detailed estimate on the work needed — an estimate that could very well exceed $300,000.

Hope Mills is not Williamsburg, Virginia, nor is it Old Salem. Hope Mills has its own wonderfully unique blend of Southern hospitality and personality. Its current leadership is smart, caring and thorough. These leaders see the big picture of Hope Mills’ future — economic development, safe neighborhoods, outstanding schools, clean streets, art, music, theater, festivals and fun, lakeside family activites. What’s not to like here? Three hundred thousand dollars less to demolish the Parish House can go a long way in building and maintaining a historically wonderful Cumberland County community.
Thank you for reading Up & Coming Weekly.