Potluck on the highway 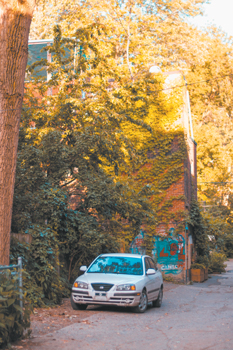 Returning from a funeral in Texas, I encountered on the west outskirts of Columbia, South Carolina, on I-20, a 10-year old Lincoln four-door sedan, which had “just died”. Occupants were “Kiki”, the driver, a 30-something-year-old woman with a purple wig, “Estevan” a 25-year old guy and two young grade-school kids. Kiki told me that the clamps to her battery posts — battery was in the trunk — were loose and the car had cut off several times.

I asked how she knew the clamps were loose. She replied that she had gotten a jump start from someone else who had told her that, but this person didn’t have any tools to tighten the clamps. I figured that getting the clamps tightened would be easy, and it was — only one clamp was loose, but it required six 1-inch-long segments of paper clip wire inserted between the clamp and post to add enough bulk to the post. This paper clip trick on the battery worked, since the engine started right away and kept running.

In the trunk, I noticed that the vehicle’s donut spare had no air; there was a gap where there should have been a bead between the tire and the rim. The spare was not needed since there was no flat tire, but when I told Kiki about the empty spare and offered to try to inflate it, she agreed.

I was hoping that my new more-powerful Viair compressor would pump air into the tire fast enough to reseal the bead without having to use a ratchet strap around the tread to force the tire’s inner lip against the rim. After massaging the tire with my hand as the compressor hummed away, I was delighted to hear a very loud pop as the bead sealed. As Estevan looked on I pointed out a jack in the trunk, but there was no lug wrench.
I informed Kiki of all this, recommending she get a lug wrench. It was then that she told me also that the vehicle’s steering was very loose so the car was hard to keep in a lane. I advised her to call for a tow or drive the car slowly and directly to a shop like Pep Boys in Columbia.
She replied that she had no money for either so she would have to try to drive it another 20 miles to her original destination. Before we split, Kiki and Estevan both thanked me for helping them. I hope they made it.
Walt’s tips:
Keep battery clamps tight, so they cannot be moved by hand.
Check the spare tire for proper inflation.
Have tire changing tools.
If the car cannot be steered safely, park it!