America is at war within 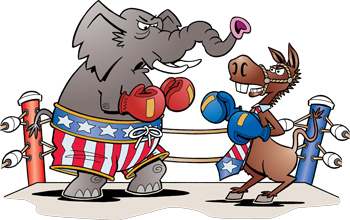 Column Gist: Within America’s borders, war is raging. We are beyond civil reconciliation. Each citizen of this great country must decide how to respond.

Finishing a series of columns last year, I ended in April with one titled “Critical thinking on today’s issues: A change in focus and strategy.” In that column, I explained my plan to work across political and ideological lines to encourage fact-based critical thinking regarding the challenging and divisive issues that we face. I hoped to do this civilly and productively. With tremendous disappointment and pure sadness, even mental anguish, I have concluded that what I intended to do on a large scale is impossible in America’s current political climate. America is at war within and, until there is a winner in that war, I expect that we will continue muddling along toward self-destruction. The question for each of us is which side we will choose, or will we choose a side at all? At the bottom line, a choice must be made.

Final recognition of our internal war status came to me by way of following the impeachment process regarding President Donald Trump. In my estimation, from the beginning, that process was without reasonable foundation, totally unfair to the president and conducted by Democrats solely in an attempt to disqualify him for the 2020 election; that failing, their effort intended to lessen support for him in that election.

The basis for the House starting an impeachment inquiry was Democrats’ allegation that, in a phone call with Ukrainian President Volodymyr Zelensky, Trump solicited foreign interference in the 2020 U.S. presidential election. The interference foundation was that Trump requested an investigation of former vice president, Joe Biden, a possible election opponent. In addition, Trump asked the Ukrainian president to investigate claims that some Ukrainians interfered in the 2016 presidential election on behalf of Hillary Clinton.

It was revealed that within hours of the phone call, millions of dollars in aid to Ukraine was put on hold. The Democratic claim was that the aid was delayed pending a public statement by the Ukrainian president saying a Biden investigation would be conducted. They also said an Oval Office meeting with President Zelensky was conditioned on him making the investigation announcement. Trump released a transcript of his phone conversation. It confirmed his request for investigations of Biden and possible Ukrainian 2016 election interference. The entire move to impeachment was started by a whistleblower complaint from a still-anonymous complainant.

Tactics employed during the impeachment inquiry by the House Intelligence Committee, chaired by Congressman Adam Schiff, D-Calif., first signaled this state of internal war. The vast majority of the committee’s hearing was conducted in secrecy. The president was not allowed representation, which included not being allowed to cross-examine witnesses. Republican members of the committee were not allowed to call witnesses. Despite the closed-door arrangement, information that might be detrimental to the president was leaked to the media. This committee heard much less public testimony. However, Republicans still had no witnesses and the president was not allowed representation or cross-examination of witnesses.

After a rushed process in the House of Representatives, two articles of impeachment were sent to the Senate for trial. They were Obstruction of Congress and Abuse of Power. The obstruction article was because Trump called on subpoenaed administration officials not to testify before Schiff’s intelligence committee that was conducting the House inquiry. In the Senate trial, Trump’s attorneys explained that the president took that position because the subpoenas were not legitimate. They argued that the Constitution gives the House of Representatives sole authority for conducting an impeachment inquiry and this process was started without a vote of the full House; Nancy Pelosi, Speaker of the House, D-Calif., simply announced the inquiry and it was underway. A vote of the House was not taken until weeks later. Therefore, the subpoenas were determined by the White House to be illegitimate.

The president’s attorneys also contended that when two branches of government disagree on a matter such as this, there would be attempts to settle the differences through negotiations. That failing, given that Congress and the executive branch, which is headed by the president, are coequal, the matter would be presented to the judicial branch (judges) for resolution. In charging obstruction of Congress, House Democrats disregarded this appropriate process. If Trump were found guilty of this article, every president from now on would be in danger of the same charge. This article was a nonstarter.

As I understand it, on abuse of power, Trump would have had to take an action that totally and clearly was for his personal benefit. A monetary bribe received would be an example. One of his attorneys, Alan Dershowitz, explained this well. The Democrats’ argument that Trump should be impeached and removed from office for taking an action helpful for the American people— but that might also benefit him politically — sets an unacceptable and dangerous precedent.

I am comfortable saying all politicians consider how any given governing decision will affect their political future. If this is not the case, why do politicians give attention to polls? In the end, the hope is that these decisions are based far more on what is good for America than on what is good for the politician. I understood Dershowitz to say that if the Democrats’ argument against Trump is accepted, politicians are to give no thought to political impact on them when making governing decisions. Accept this argument and every politician would be in jeopardy.

With this personal gain piece in consideration, I did not see anything in the Democrats’ argument that showed Trump was substantially motivated by personal benefit. The Trump position was that he was seeking to ensure our aid money was not going to a country, with a history of corruption, where corruption was not being seriously addressed by the new president (Zelensky). Further, the president was bothered that America was providing substantial support to Ukraine while other countries were doing little or nothing. Witnesses, called by the Democrats, confirmed that the president had these concerns.

Given that Biden’s son, Hunter, was put on the Burisma — a Ukrainian oil company — board and paid over $50,000 per month (some reports say $83,000) when he had no oil experience, and only attended a few events that might have been board-related, there was reason for suspicion. Then Joe Biden goes in and gets the prosecutor fired who is investigating Burisma for corruption. He does this by threatening to withhold monetary aid. Several witnesses, called by Schiff’s committee during the inquiry, stated that they had concerns regarding Hunter Biden being on the Burisma board. I have seen no indication that anybody investigated this matter. Trump calls for an investigation, and he is impeached. The argument is that he called for the investigation because Biden entered the 2020 presidential race and Trump wanted to use the investigation against him. It seems to me that having Biden become president without addressing this situation would be irresponsible. The president had good reason to investigate in the interest of the American people.

Beyond all of this, Ukraine received the aid on time and their president met with Trump while never starting an investigation or announcing that one would be started. The Ukrainians did not know the aid was on hold until seeing it in an article weeks after the phone call.

Thankfully, the Senate acquitted Trump. However, consider this definition of war from Encyclopedia Britannica: “… in the popular sense, a conflict between political groups involving hostilities of considerable duration and magnitude.” I contend that what Democrats did in this impeachment process, as summarized above, and is even more horrendous when examined in detail, fits the definition of war. Even more disturbing, this kind of conduct has been their practice from the day Trump announced his candidacy for president.

This is war within America. In my column referenced in this article’s opening, I noted that I had changed my voter registration from Republican to unaffiliated. I have, as much as I dread having to do so, accepted that we are at war, and I have to choose a side. I have chosen by changing my affiliation back to Republican. Every American better choose and choose wisely. Sitting on the sideline is not an option. The future of our nation is at stake.