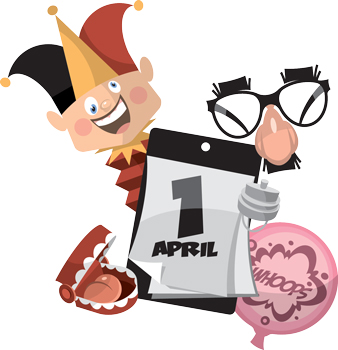 What do you get when have a select group of people who didn't get the memo that the calendar had been modified and the start of the New Year was now pushed back by three months? April Fools' Day, that's what. Although the tomfoolery that occurs each April 1 may not feel very old, April Fools' Day traces its origins back several centuries.
One legend states that April Fools' Day originated in the 1500s and has remained a day for hijinks ever since. Prior to the 1500s, the western world relied on the Julian calendar to keep track of time. According to the Julian calendar, years began on March 25. However, since March 25 fell during Holy Week, the new year festivities were pushed back to the first day of April. In 1582, Pope Gregory XIII decreed the adoption of the Gregorian calendar, which switched New Year's Day from the end of March to January 1.

Many people were informed of this change, yet those who lived in rural areas, or had not heard about the calendar change, continued to celebrate the arrival of the new year on April 1. These people were mocked, and some  people in the know would try to confuse people into thinking that April 1 was still New Year's Day and that they were receiving a New Year's visit. From this tradition grew the one that is observed today, with people trying to fool unsuspecting individuals with all methods of pranks and trickery.
In France, jokes may have involved placing paper fish on the backs of the gullible. These poisson d 'avril (April fish)symbolized a young, easily caught fish, or someone who was easily pranked.

April Fools' antics eventually spread outside of France to Britain and then around the world. While pranks were once simplistic in nature, many are now more intricate. According to Snopes, a popular April Fools' hoax dates back to 1957 when the BBC convinced its audience that spring would arrive early, and with it, an early spaghetti harvest in Switzerland. Video showed peasant women harvesting spaghetti from trees, now that the ravenous spaghetti weevil, which had caused havoc to past harvests, was finally defeated. The station received scores of calls asking to view the harvest or inquiring how they could get a spaghetti plant.

In 1996, in the United States, the popular fast food chain Taco Bell convinced the public that it had agreed to purchase Philadelphia 's Liberty Bell and wanted to rename it the Taco Liberty Bell.

In 2016, the Texas state comptroller's office announced that redback paper money would be reissued in the state for the first time since 1840, and it would feature Willie Nelson 's face on the $10 bill.

April Fools' jokes have evolved throughout the centuries. Although the exact origins cannot be accurately pinpointed, the fun ensues nevertheless.