Do you really want to seriously discuss race and racism? 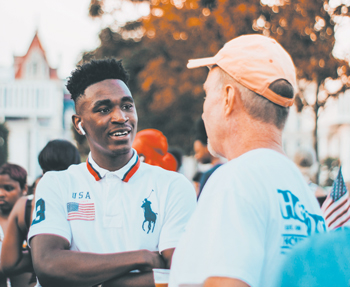 Column Gist: I do not know what the situation will be in America when this column is published; however, protests, too often accompanied by violence and looting, have been routine over the last two weeks. The horrible killing of George Floyd prompted all of this. A primary component of what is being called for is a discussion of race and racism in America. Watching all that is being done in this time, and what is being said, leads me to ask if there is a real desire to seriously discuss race and racism in this country.

This, from a Wikipedia article titled, “Killing of George Floyd”:

“On May 25, 2020, George Floyd, a 46-year-old black man suspected of passing a counterfeit $20 bill, died in Minneapolis, Minnesota, after Derek Chauvin, a white police officer, pressed his knee to Floyd’s neck for almost nine minutes while Floyd was handcuffed face down in the street; two other officers further restrained Floyd and another stood by and prevented onlookers from intervening.”

As I start this column on June 8, protests intended to be peaceful have been conducted for several days across America. Many of these protests ended with the looting of businesses, burning of buildings, attacks on police officers and civilians and even killing of innocent people, including police officers.

Let there be no doubt, the killing of George Floyd was a horrendous act that should never be inflicted on any human being. Amid the protests and violence that accompanies many of them, there is a call for discussing and confronting the alleged “rampant racism” in America. It is often referred to as “systemic racism.” The focus of the protests, speeches and other actions has been the contention that police killings of black citizens are out of control. Some people even label the situation as one of “genocide.” A Google search gives this definition of genocide: “… the deliberate killing of a large group of people, especially those of a particular ethnic group or nation.”

Any discussion where there are differing thoughts or positions requires that all parties be able and willing to acknowledge what is factual. Just yesterday, I was in more than a two-hour phone discussion with a black friend that I have known for almost 70 years. We disagree on just about every consideration relating to the condition of black Americans. At one point in the conversation, I quoted some statistics to support a comment I had made. His response was that statistics can be twisted and what I was quoting probably came from some conservative source. I suggested that he check the statistics and source for himself. He had no interest in doing that. If you are not willing to come to grips with facts, are you really serious about discussing race and racism in America? The good news regarding that friend is that we left the conversation still friends. That has become a rare experience over the past several years since I started sharing my conservative views.

Against that backdrop, consider some facts. In 2015, The Washington Post began to log every fatal shooting by an on-duty police officer in the United States. Data for 2019, from The Post, is referenced in an article by Heather Mac Donald titled, “The Myth of Systemic Police Racism.” Portions of that article follow, but I encourage reading the full piece:

“In 2019 police officers fatally shot 1,004 people, most of whom were armed or otherwise dangerous. African-Americans were about a quarter of those killed by cops last year (235), a ratio that has remained stable since 2015. That share of black victims is less than what the black crime rate would predict, since police shootings are a function of how often officers encounter armed and violent suspects. In 2018, the latest year for which such data have been published, African-Americans made up 53% of known homicide offenders in the U.S. and commit about 60% of robberies, though they are 13% of the population.

“The police fatally shot nine unarmed blacks and 19 unarmed whites in 2019, according to a Washington Post database, down from 38 and 32, respectively, in 2015.

“In 2018 there were 7,407 black homicide victims. Assuming a comparable number of victims last year, those nine unarmed black victims of police shootings represent 0.1% of all African-Americans killed in 2019. By contrast, a police officer is 18 ½ times more likely to be killed by a black male than an unarmed black male is to be killed by a police officer.”

The Mac Donald article indicated that police killed nine unarmed blacks in 2019. In his June 3 show, Tucker Carlson on FOX Cable News reported this number as 10. Carlson included the one unarmed black woman who was killed while Mac Donald only included black men. Carlson reviewed what happened in each of the 10 cases. This is what he indicated: in five cases, the officer was clearly attacked by the offender; one involved an accidental shooting while the officer was struggling with the victim; four resulted from pursuit of an offender… two of these officers were charged with homicide. Watching the Carlson piece is absolutely necessary for anyone who wants to fairly answer the question posed by this column. Go to https://www.youtube.com/watch?v=1qwif8PF1EI and start
watching at 6:40.

Examination of the information put forth by Mac Donald and Carlson gives a person reason to ask whether there is really out-of-control killing of black Americans by police officers; is there “black genocide?” The information used by Mac Donald and Carlson was based on data published by The Washington Post. It should be noted that a guest on Laura Ingram’s show, June 4, indicated that The Post changed the number of unarmed blacks killed by police officers in 2019 from 10 to 15. Does that increase of five change the picture?

Beyond the 10 or 15 deaths of unarmed black citizens attributed to police shootings in 2019, consider the 7,407 black homicide victims in 2018 — a number that will likely be similar in 2019. Following from an article by Barry Latzer titled, “The Need to Discuss Black-on-Black Crime”:

“In 2018, where the homicide victim was black, the suspected killer also was 88 percent of the time. And this is not an exceptional situation. From 1976 to 2005, 94 percent of black victims were killed by other African Americans.”

Seriously and successfully discussing race and racism requires that all voices be heard without anybody facing intimidation or penalty. An example of how this absolute requirement looks, when violated, shows in action taken by the Carolina Panthers, Charlotte Hornets, North Carolina State University, University of South Carolina and the Charlotte Knights minor league baseball club. An article at www.wsoctv.com/news titled, “Panthers, Hornets cut ties with CPI Security after CEO’s protest remark” applies. Segments follow:

“Charlotte’s two professional sports franchises, as well as two universities, have canceled partnerships with a North Carolina home security company after the firm’s CEO told an activist, who leads Queen City Unity and called for a boycott of CPI, he should focus on black-on-black crime rather than the George Floyd protests.

“Queen City Unity’s executive director said he sent a letter to city leaders calling for change when it comes to police brutality and community safety.

“In response, he said he received an email from CPI CEO Ken Gill saying in part, ‘A better use of time would be to focus on the black-on-black crime and senseless killing of our young men by other young men.’”

The CPI CEO offered an apology for his comments in a tweet. Considering the facts presented earlier, should CPI be punished for the CEO’s response? Was the CEO at all out of line in his comment? Do the actions of the Panthers and others advance serious discussion of race and racism?

If you see yourself as a person who really wants to discuss race and racism in America, how do you measure up on just these two points: (1) facing facts and (2) hearing opposing voices without seeking to intimidate or punish the sources of those opposing views?