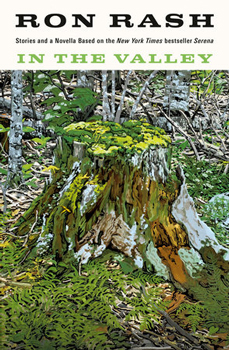 Can he do it by resurrecting the evil, enticing central character of his 2008 best-selling novel, “Serena”?

Serena, you might remember, was ambitious and dramatically attractive, riding a white horse and displaying her well-trained eagle. In the early 1930s, she and her husband were determined to get rich by clear-cutting thousand acres of North Carolina mountain forestlands, destroying a rich, stable and precious environment.

Rash made Serena a symbol of corporate greed and anti-environmentalism.

Serena was also driven by personal passions. She was determined to eliminate her husband’s illegitimate son and the child’s mother. This assignment went to Galloway, a one-armed employee utterly devoted to Serena.

Galloway’s effort, chronicled in the original book’s dramatic last pages, was nevertheless a failure. The boy and mother were safe, and Serena was off to exploit the forests of Brazil.

A novella that is part of Rash’s new book, “In the Valley,” brings Serena back to North Carolina to take charge of a logging project to meet a hard deadline.

Galloway also returns to take on Serena’s murderous assignments, including the search for the mother and her son.

Readers will again be impressed and horrified at Serena’s determined and brutal efforts that destroy more of the environment and decimate the crews.

What is the connection to Rash’s worries about the environment?

In an interview last week with Mountain Times Publication’s executive editor Tom Mayer, Rash explained, “I’m seeing now this peril for the national parks. There’s a lot of push to change what is considered wilderness that can be mined or timbered. My hope is that this [story] would remind us how hardwon these national parks were and what they were fighting against.”

The new book has a bonus for fans of Rash’s short fiction.

There are nine finely tuned short stories. All deal with mountain people like those he knows from growing up in or near the mountains or from his long years teaching at Western Carolina University.

These are folks that Rash clearly cares for and worries about. But the time settings vary, giving readers a look at mountain life over hundreds of years.

In the opener, “Neighbors,” set during the Civil War in the Shelton Laurel community, a Confederate foraging and raiding party targets the farm of a young widow and her two young children.

“When All the Stars Fall” deals with a poignant breakup of a father’s and son’s construction business because their value systems are different.

In “Sad Man in the Sky,” a helicopter pilot who sells 30-minute rides takes on a troubled but inspiring passenger.

In “L'Homme Blesse” a mountain college art professor explores the connection between the artwork of a Normandy invasion veteran and the images on the walls of ancient caves in France.

“The Baptism” is the story of a country minister and a wife abuser who wants to be baptized. The story has a satisfying surprise ending.

A young female probationary park ranger in “Flight” encounters a bully who lacks a fishing license and breaks all the rules. Her daring retort is illegal but satisfying.

A struggling late-night storekeeper in “Last Bridge Burned” helps a troubled woman who stumbles into his store. Years later, he reaps an interesting reward.

In “Ransom,” a wealthy college student survives a lengthy kidnapping only to face another set of challenges.

Set 60 years after the Battle of Chickamauga, “The Belt” tells how a belt and its buckle that saved a Confederate soldier’s life now saves the life of his great-grandson.

Any one of these stories would be worth the price of the book, but getting all of them plus the new Serena installment makes “In the Valley” the literary bargain of the year.