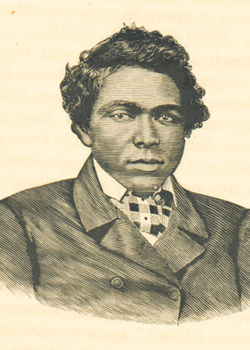 Whether Democrat Yvonne Holley or Republican Mark Robinson wins the 2020 race for lieutenant governor, North Carolinians will be electing the first African American candidate to that post.

If you follow state politics closely, you already know all that. But do you know the name of the first African-American to appear on North Carolina’s statewide ballot — and win?

It’s a bit of a trick question, I admit, because the election I’m talking about wasn’t, strictly speaking, for public office. The answer is Abraham Galloway, whom voters chose as one of North Carolina’s presidential electors in 1868.
Galloway is one of the most intriguing figures in the history of our state — and another North Carolinian who, in my opinion, deserves to be honored with multiple statues and monuments.

Born a slave in what is now Southport, Galloway became a skilled brick mason and joined a thriving community of Black craftsmen, sailors, and activists in antebellum Wilmington. He escaped to freedom in 1857 in the cargo hold of a schooner bound for Philadelphia. Making his way via the Underground Railroad to Canada, Galloway soon became an active abolitionist.

When the Civil War broke out in 1861, Abraham Galloway performed another brave act: he returned to the South to work as a spy, and later as a recruiter, for the Union Army. In his 2012 book “The Fire of Freedom: Abraham Galloway & The Slaves’ Civil War” historian David Cecelski does a masterful job of relating Galloway’s exploits during the war — or, at least, the exploits for which there is a historical record, as Galloway was himself illiterate and narrated only some of his experiences to others after the fact.

Cecelski uses a particularly dramatic scene to kick off the book. A New England abolitionist and federal agent named Edward Kinsley arrives in New Bern in 1863 with a mission to recruit African Americans into the Union Army. It soon becomes clear, however, that he’ll have no success unless he bargains successfully with Galloway, already a leader of the local Black community.

Galloway demands equal pay and fair treatment for Black soldiers, as well as a pledge that the Union will fight for abolition, not just to reassemble the Union. Only after Kinsley agrees do Black recruits step forward — first in the hundreds, eventually in the thousands.

After the war, Abraham Galloway helped organize the new Republican Party in North Carolina, played a key role at the 1868 convention that drafted a new state constitution, and won election to the North Carolina Senate several months later, all the while “defying nightriders and assassins,” as Cecelski put it.

During his brief but momentous political career — Galloway died abruptly of natural cases in 1870 at the age of 33 — he not only championed the rights of Black North Carolinians but also fought for women’s suffrage and educational opportunity. If you’re a progressive, you’ll appreciate Galloway’s advocacy of new labor laws. If you’re a conservative, you’ll appreciate his advocacy of gun rights and deep suspicion of the state-subsidized railroad company.

While unyielding in his quest for justice, Galloway sought to build bridges and conciliate former adversaries whenever possible. Picked to give the opening address at the founding convention of the state GOP in 1867, he insisted he spoke as “neither Republican Black man nor Republican white man” but for the party as a whole. “A man may be a Dutchman or an Irishman, a Yankee or a Southerner, and I tell you I will give him a hearty shake and a warm welcome upon the Republican platform,” he said.

Whatever your politics, Abraham Galloway can and should be one of your heroes.