How to avoid future regrets 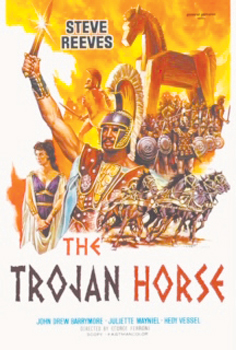 There are real moments of insight and clarity on late night TV if you will only look. Once upon a time, in a galaxy pretty close to ours, came such a moment of clarity. Heck, it was our very own Milky Way galaxy while I happened to be watching a rerun of “Highway Patrol.”

“Highway Patrol” was a 1950s show featuring Sgt. Dan Matthews. Sgt. Dan seldom took off his hat and usually killed a bad guy in the last five minutes of the program. Right after Dan killed the bad guy, a commercial came on selling gold-plated fake buffalo head nickels for only $9.99 each. Each household was strictly limited to being able to buy five fake nickels. What got me interested was the tag line: “AVOID DISAPPOINTMENTS AND FUTURE REGRETS. You must order now!” The low, low price could only be guaranteed for five days due to the ever-increasing cost of gold plating and unlimited suckers with credit cards.

Paris had a colorful background. His baby daddy was King Priam of Troy and his momma was Hecuba. Right before giving birth to Paris, Hecuba had a bad dream that she was going to give birth to a burning torch. Yikes! The oracle cyphered this meant the new baby would end up destroying Troy. King Priam ordered his Flunky to kill the newborn Paris. The Flunky took Paris up to a hill but couldn’t kill a baby. He just left the baby on the hill hoping Paris would have the good sense to die.

Fortunately for Paris, a lactating Momma Bear lumbered along and nursed him back to health. The Flunky came back about a week later hoping to bring Paris’ body back to show the King. As Gomer would say, “Surprise, surprise, surprise!” Paris was still alive. The Flunky decided to adopt Paris. Then the troubles began. (Trigger warning to PETA fans) To prove to Priam that Paris was dead, the Flunky brought Priam a dog tongue claiming it was from Paris.

The gods decided to have a Miss Olympus Beauty pageant to decide who was the most beautiful goddess of them all. The three finalists were Hera, Aphrodite and Athena. Zeus the King of the gods, was asked by the bevy of beauties to decide who was the best looking. Zeus wasn’t King for nothing. He knew whomever he picked, that the other two would hate him. So he delegated the judging to Paris. Paris was no dummy either. He had each of the goddesses undress so he could decide who was the best looking. Miraculously they were all so beautiful he could not decide. Each goddess then tried to bribe him to choose her as Queen of the Hop. Ultimately Aphrodite’s bribe won when she offered Paris the most beautiful woman on Earth, Helen of Sparta.

Let me tell you, Helen was a doll baby. However, there was a catch. Helen was already married to King Menelaus of Sparta. Paris snuck into Menelaus’ palace and snatched up Helen. Then off he ran with her. Helen became smitten with Paris. They went back to Troy to live happily ever after. But there was another catch. Menelaus wanted her back pronto. He gathered up an army of angry Greeks and hightailed it to Troy. Paris refused to give up Helen, noting possession was 9/10s of the law. Menelaus replied to Paris, quoting Bugs Bunny saying “Of course you know, this means war!” Turned out it was the Trojan War.

A whole bunch of fighting, stabbing, dueling and slaying ensued between the Greek and Trojan armies. Lots of Greek heroes ended up dead including Achilles who got an arrow right slam into his ankle. His ankle was the only place he could be killed. When Achilles was a baby, his Momma dipped him into a magic stream that would protect him from all wounds. She held him by his ankle when she dunked him. Medically, this meant his ankle didn’t get wet resulting in an unprotected spot. As luck would have it, Paris’ arrow hit him right in the wrong ankle resulting in Achilles expiring. That is why you have Achilles tendons in your feet to this very day.

The Greeks hung around Troy for about 10 years doing siege stuff that didn’t work. Finally, the Greeks built a giant wooden horse to trick the Trojans into thinking the Greeks had given up. The Greeks filled up the horse with soldiers, leaving a note saying the horse was a gift and that they were going back to Greece. The Trojans saw the horse, read the note, and believed they had won. Counting their chickens before they were hatched, the Trojans hauled the horse into Troy to celebrate. Once inside the gates, the Greeks popped out of the horse and wiped out the city of Troy. Hence the old saying, beware of Greeks bearing gifts.

So, what have we learned today? Once again, not much. While you should never look a gift horse in the mouth, buying a fake buffalo head nickel might lead you to avoid disappointment and future regrets. Neither Steve Reeves or any dogs were harmed during the writing of this column.