Nothing has happened in 2020

In the “Game of Thrones” when a character wanted to scare people he would say “Winter is coming.” But before the Night King shows up in 2020, Halloween is coming. This column will grace the streets and bird cage bottoms the week before Halloween. As this year has been an abyss of boredom, it is only fitting to ponder what the endgame of 2020 might be able to bring us in the way of excitement and constitutional crisis. So far 2020 has been a mundane and forgettable experience. Nothing new has happened. Everyone has gotten along swimmingly.

The lions have lain down with the lambs without tufts of bloody wool or even rancor in the air. As our old French pal Voltaire’s character Candide said: “This is the best of all possible worlds.” Voltaire may have been funning us just a little bit with this philosophy, but he wrote in French so who knows? The French also think that Jerry Lewis was the world’s greatest comic genius and that snails are good to eat. You might want to take French philosophy with a grain of salt. If you have some salt left over you can spread it on the snails in your back yard, fry them up in garlic and wine and have them for supper. But I digress.

Back to Halloween, which next to Thanksgiving is my favorite holiday for anyone who is keeping score. Mr. Google opines that Halloween began once upon a long time ago as a Celtic festival called Samhain. Samhain is many centuries old, coming to us courtesy of the Druids. Samhain was the event horizon between the end of summer and beginning of the winter. Fun time was over and survival time was about to begin. The living and the dead bumped up against each other on Samhain. Ghosts came back to mess with the living. In order to prevent the ghosts from harming the living, the Celts turned to their priests, the Druids. Like Jerry Falwell Jr. and other religious leaders, the Druids were in charge of telling the common folks what they should do to stay on the good side of the Gods.

It turned out the best way to keep ghosts at bay was to have a party. The Druids built bonfires to offer sacrifices to the Gods. The common folks dressed up in animal skins and costumes to boogie down around the sacred bonfires. They partied like it was 100 B.C. As smart as the Druids were, they weren’t smart enough to keep the Romans out. Around 43 A.D. the Romans ruled the Celts. No one ever accused Romans of missing the opportunity to have a party. The Romans combined Samhain with a couple of their festivals: Feralia which honored dead Romans and Pomona which honored apples and fruit trees. Mr. Google says Pomona is the source of the custom of bobbing for apples at Halloween.

The Catholic church in 1000 A.D. declared November 1 and 2 as All Saint’s Day and All Souls’ Day to remember the dead. The proximity of the date of All Souls’ Day with Samhain was a means of getting rid of the Celt’s holiday but replacing it with a Vatican approved holiday doing about the same thing. The Medieval peasants partied down dressing as angels, saints and devils hanging out around bonfires. The night before All Saint’s day was called All-Hallows which eventually became our old friend Halloween. As you sit at home socially distancing this Halloween without trick or treaters or COVID-19 knocking at your door, kindly give a thought to the Druids who made this all possible.

Now back to the premise of this written waste of your time. What comes at the end of 2020 that might wake us from our stupor of this most bland of years? There is an election coming up shortly that might be somewhat interesting. Recently our Dear Leader had a rally on the South Lawn of the White House with about 400 of his friends, the good people of BLEXIT. The BLEXIT fans may have had some of their travel expenses paid to attend the rally. Nothing says we are behind you like paid supporters. The White House rally was a striking super spreader festival of red hats and turquoise shirts. It appears as a result of this rally, that Dear Leader has wrapped up the Garden Gnome vote as the attendees all dressed like Garden Gnomes. In a close Presidential election, the Garden Gnome vote could be decisive. Like Hillary Clinton ignoring the voters of Michigan, Wisconsin and Pennsylvania in 2016, Joe Biden’s failure to court Garden Gnomes could prove fatal to his Presidential ambitions. There is no known Gnomes for Joe PAC supporting the Biden campaign. Biden has given short shrift to the Gnome vote.

The Garden Gnomes are a mysterious cohort of voters. No one knows why there is a G in their tribal name of Gnomes. Wouldn’t a Garden Nome without a G smell as sweet? Our favorite antelope the Gnu also has a silent G. A gnat without its G would still be as irritating as a Nat. If The Rona is causing you to gnash your teeth at night from stress, wouldn’t your teeth wear down at the same rate if you dropped the G and just nashed your teeth? What’s up with that? Why does the English language waste all these G’s? Ponder this Mr. English Professor: Nome, Alaska has gotten along perfectly well without a G in its name since it was founded in 1901.

As Tiny Tim almost said, “A Merry Samhain to us all; may the Druids bless us, every one!” 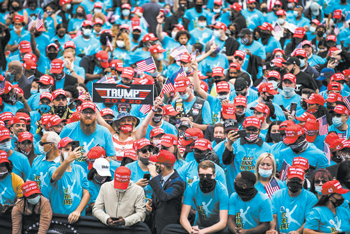 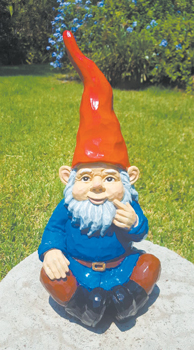 Pictured: The author postulates that POTUS may have secured the Garden Gnome vote since attendees at a recent rally were dressed as gnomes.