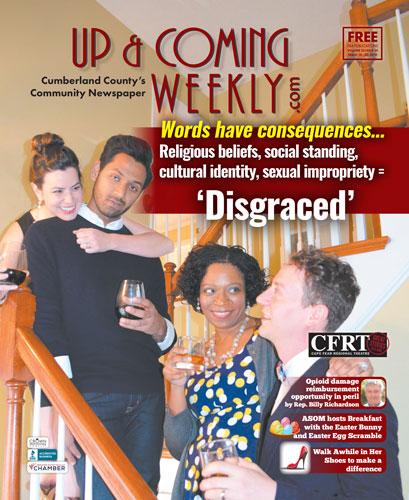 “Any opportunity to discuss these topics in any local community would be a good thing to allow people to review their own viewpoints and challenge them,” said Dr. Andrew Ziegler Jr., professor and chair of the political science department at Methodist University.

Ziegler will serve as the moderator for a pre-show discussion March 18 at CFRT called “No Politics at Dinner: How Do We Discuss Difficult Topics.”

These hot-button topics will be on full display in “Disgraced,” said CFRT Artistic Director Mary Kate Burke. The story deals with how the topic of radical Islam affects public discourse on our differences in race and creed. It examines how we not only have preconceived ideas of other people, but also often struggle with our own self-identity.

“This particular show is taking on some tough issues,” Ziegler said. “But theater allows us to do that.”

In the play, two couples meet for dinner. As they exchange observations about careers, faith and politics, tempers flare and things get tense. Secrets are revealed and lives are upended.

Amir is a Pakistani-American lawyer working for a Jewish firm in New York. He is set for a huge promotion until he agrees to defend an Islamic imam accused of terrorism. Amir’s wife, Emily, is an artist about to book a major gallery showing of her work based on Islamic imagery. The couple hosts Isaac, a Jewish curator, and his wife, Jory, an African- American woman who works at Amir’s firm.

Director Dani Keil said the play presents complicated characters and enough action to pull the audience in before delivering a “gut punch” that will leave them with questions and conflicting feelings.

As the story unfolds, our empathy for those characters changes, Burke said.

“There are no heroes and villains, just complicated people,” Burke said. “It’s really the best kind of family drama. The heart of the play is when people judge you based on some perception of who you are.”

Actor Raji Ahsan, who plays Amir, has performed in two productions of the play and said he learns more about himself and the characters each time.

“All the characters have flaws,” Ahsan said. “I believe everybody in this play does something disgraceful.

“This play really challenges stereotypes. The idea of identity is made up of myriad things, not just how you were raised.”

His character Amir is in a battle of identity and reinvention – wanting to fit in and find success, but unable to reconcile his culture with the American dream. He finds that even if you distance yourself from your culture, the outside world may never see past their preconceived notions of you.

The play presents an opportunity to address such notions and start a dialogue, said Burke.

“These characters are debating various issues around their lives and identities and who deserves success and not,” Burke said. “The experience of watching the characters going through it hopefully allows you to consider how you treat other people.”

Ziegler said his previous military service and deployments overseas helped him learn the importance of opening a dialogue to gain awareness of stereotypes in order to bridge divides among people of different backgrounds.

“The notion of acceptance and tolerance – it’s okay for people to hold different viewpoints but not to demonize people who hold different viewpoints than our own,” Ziegler said. “I think most of us do not confront beliefs and ideas that we disagree with. The theater gives incentive for people to go and creates an opportunity to hear and see things they might not face.”

Listening is the first step in recognizing some of these ideas, Ahsan said.

“Humans have a problem listening,” he said. “It’s the downfall of any sort of progress – personal or professional. Things only change when we accept a point of view we never really considered.”

Seth Shelden, who plays museum curator Isaac, said “Disgraced” presents no clear answers or assertions of right or wrong. “I couldn’t tell you what the author’s political affiliations are,” he said. “He’s showing us how hard it is to tell other people what your identity is.

The problem arises when people attempt to speak for another’s identity, such as Lauren Mae Shafer’s character Emily.

“She is a white woman doing art based on Islamic traditions,” Shafer said.

Burke said “Disgraced” is being produced in an intimate manner, with the audience sitting on three sides of the stage.

“We want people to feel unclear about what their own preconceived notions are,” Burke said. It mimics voyeurism, she said, where the audience members will feel as if they are in Amir’s apartment, watching this story unfold right before their eyes.

This arrangement does limit seating on the already limited-run show, so audience members are encouraged to get their tickets early.

In addition to Ahsan, Shelden and Shafer, the cast includes Alason Little as Jory and Darius Shafa as Abe.

CFRT has a number of special events scheduled to support “Disgraced.”

Friday, March 16, at 7:30 p.m. at CFRT. Be the first to see “Disgraced” and stay after for hands-on art making with dessert and tea.

Saturday, March 17, at 7:30 p.m. Stay after the show to celebrate with the cast and creative team.

“No Politics at Dinner: How Do We Discuss Difficult Topics”

Discussing politics and religion in social settings is often frowned upon, but what are the benefits of talking about these topics? Break the rules of polite conversation as experts and journalists lead a pre-show discussion. The discussion will be moderated by Dr. Andrew Ziegler Jr. of Methodist University. Panelists include Dr. Naveed Aziz, Dr. JR Hustwit and Paul Woolverton from The Fayetteville Observer.

Military members and family receive discounted tickets for the show.

“Disgraced” is a limited-run show March 15-25 with limited seating based on a new stage configuration. The play is rated R due to its language and violence. There are discounts for military, seniors and students. For tickets or more information on special events, contact CFRT at 910-323-4233 or visit www.cfrt.org.