Fort Bragg: An American institution with a global reach 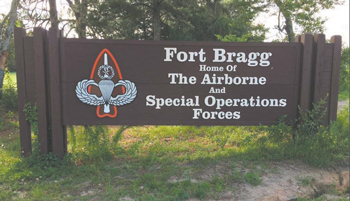 Last week, I was interviewed by a reporter for The Washington Times who wanted to know if I was for or against the proposed renaming of the Fort Bragg military installation. Without hesitation, I told her I felt changing the name was an ill-conceived idea and another unfortunate knee-jerk reaction to the unsavory political unrest our nation is currently experiencing. I also told the reporter she would be hard-pressed to find five people out of 100 who even knew who Braxton Bragg was, let alone know he was a general in the Confederate Army — and an unpopular general at that.

Fort Bragg has a proud and honorable history. It’s home to the 82nd Airborne Division. The renaming controversy, to many, appears to be another example of political exploitation of the ill-informed. It would undoubtedly deal a death blow to Fayetteville both emotionally and economically, stripping it of it’s one single valuable and marketable asset. Besides, Fort Bragg, North Carolina, is not the first military installation named after North Carolina’s native son Braxton Bragg, who was born in Warranton, North Carolina. In Northern California, there is an entire city named after him — Fort Bragg, California. In 1857 the U.S. military established an army post on the Mendocino Indian Reservation, and the young lieutenant in charge of that project, H. C. Gibson, named the post in honor of then-captain Braxton Bragg, whom he admired as his commanding officer in the Mexican-American War. Hence, Fort Bragg, California, est. 1857. The main highway, Route 20, entering this city of 7,500 is named Fort Bragg Road.

Bragg went on to be a general in the Army of the Confederacy from 1861-1865. He died in 1876. Even though Bragg was one of the 750,000 Confederate soldiers who fought in the Civil War, he contributed little to history or the outcome of the war.

Fort Bragg, North Carolina, was created in 1918. Forty-two years after his death. So, why did they name this military installation after Bragg? Who knows. Maybe it was because he was from North Carolina. Or, maybe it was because of Fayetteville’s close proximity to the Battle of Bentonville, which was the last Civil War skirmish Bragg participated in.

With the naming of an Army post 42 years after his death, it’s doubtful it had anything to do with elevating or advocating for antiquated Confederate values.
What’s important today is what this proud military installation means to our soldiers, our community, the nation and the world. Fort Bragg is much more than a name; it’s an institution with a global reach and humanity’s assurance that goodwill always triumphs over evil.

In a former career and for over a quarter of a century, I traveled coast to coast working and meeting tens of thousands of people in hundreds of cities and towns across America. Never, and I mean never, when I introduced myself and told them I’m from Fayetteville, North Carolina, did they not instinctively mention Fort Bragg with an enthusiastic sense of patriotism and pride. They understand that as one of the largest military bases in the country, we house and deploy the most impressive, mightiest and deadliest fighting machine on Earth. Worldwide, people know Fort Bragg. They trust Fort Bragg. They respect Fort Bragg, and our enemies fear Fort Bragg. They know that anywhere in the world, when a nation gets in trouble and dials 911, it is Fort Bragg that picks up the phone. Fort Bragg is an American icon of freedom, pride, patriotism, justice and democracy. Fort Bragg is synonymous with world security and stability.

Changing the name of the most historically significant American military installation in the world just to appease the reactions of political activists looking to make a statement is not worth debasing the spirit of North Carolina, the Fayetteville community or the patriotic pride of the millions of soldiers, veterans and their families that have called Fort Bragg their home. We can only pray that common sense prevails in this matter. After all, that’s a lot of street signs to change and birth certificates to reissue.