A woman in full 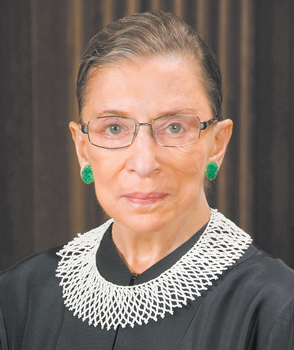 In the days following her death, we have all been reminded of Ruth Bader Ginsburg’s legal legacy — championing of women’s rights in all areas of American life. By the time she arrived on the U.S. Supreme Court in 1993, she had already wiped more than 200 discriminatory laws — many gender-based — off the books, and she authored some of the most powerful dissenting opinions in American judicial history. She even wore a special collar on her robe when one of those dissents was coming.

Very personally for millions of American women, we now hold credit cards in our own names only because Ginsburg sued to remove formerly mandatory names of husbands and fathers. Born during the Great Depression and living well into the 21st century, it is more than fair to say Ginsburg’s steadfast and brilliant legal work changed the lives of women and families across our nation. She was an intellectual prize fighter disguised in the body of a tiny woman.

Historians will debate her legal legacy for generations, but it is important to understand that Ruth Bader Ginsburg was a working wife and mother, and later grandmother, facing and knocking down the same challenges as other women of her generation. Even as a graduate of an Ivy League law school, she could not find work as an attorney because she had a young child. She was helped more than many of her contemporaries by a strong and supportive husband and enjoyed and happy 56-year marriage and remained close to her children and grandchildren until her death. In her later years, she unexpectedly became a pop icon, the notorious RBG, nicknamed after a rap singer, and she used her status to speak to generations of younger Americans.

Pundits are writing about RBG nonstop in the days since her death, but the Justice herself spoke about her life and career. It cannot be said that she did not understand exactly what she was doing and why.

On her career, Ginsburg made these observations.

“Fight for the things that you care about. But do it in a way that will lead others to join you.”

“Don’t be distracted by emotions like anger, envy, resentment. They just zap energy and waste time.”

“I don’t say women’s rights — I say the constitutional principle of the equal citizenship stature of men and women.”

“I am sometimes asked ‘When will there be enough (women on the Supreme Court)? and my answer is ‘When there are nine.’ People are shocked. But there have been nine men, and nobody’s ever raised a question about that.”

“I would like to be remembered as someone who used whatever talent she has to do her work to the very best of her ability.”

On life in general and her life in particular, Ginsburg commented. “My mother told me to be a lady. And for her, that meant be your own person, be independent.”

“Women will have achieved true equality when men share with them the responsibility of bringing up the next generation.”

“I remember envying the boys long before I even knew the word feminism, because I liked shop better than cooking or sewing.”

“If you have a caring life partner, you help the other person when that person needs it. I had a life partner who thought my work was as important as his, and I think that made all the difference for me.”

Ruth Bader Ginsburg spent her life, both public and private, making sure that “we, the people” includes all of us, men and women of all colors, backgrounds, and experiences.

Hers was a life very well lived.