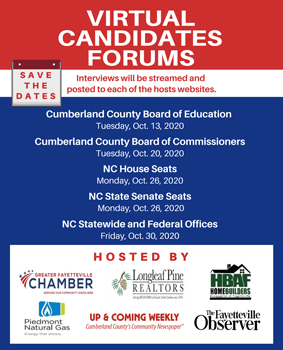 This forum features candidates for the Cumberland County Board of Education.

The next forum will be Oct. 20 at 3 p.m. featuring Cumberland County Board of Commissioners candidates. 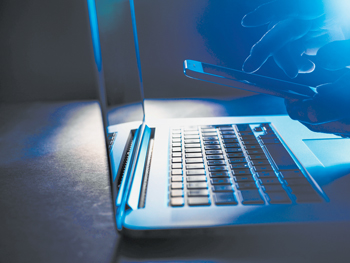 On Oct. 8, Fayetteville Technical Community College hosted College Transfer Day via a virtual platform. While this year’s event looked slightly different than years past, the Office of University Outreach adapted and was pleased to continue this opportunity for FTCC students.

College Transfer Day serves as an avenue to promote the transferability of students’ community college academic credits to public and private four-year colleges and universities.

The process of transferring to another college is not identical to applying to college for the first time. While a student’s high school transcript and SAT/ACT scores may be reviewed, these items typically take a back seat to the academic college transcript that a student has earned at the community college level. Students need to be cognizant in earning strong grades if they hope to stand out in the application process utilized by some extremely competitive transfer programs. The community college student’s academic college transcript will be reviewed more rigorously than the high school transcript.

College Transfer Day presented by University Outreach is a great way for students to learn about each school’s unique policies and deadlines. Transfer students need to be mindful of adhering to a university’s specific deadlines, a contrast to the open-door admissions policy held by many community colleges. Universities not only have deadlines that may vary from one school to another, many also have specific policies for transfer students.

College Transfer Day is a great way for students to learn about these policies and deadlines firsthand from advisors and college admissions representatives. It is also an avenue for students to make contacts, receive college and university literature, and have specific questions answered as related to academic requirements for transferability.

While the current pandemic has presented students and universities with several challenges, the challenge of being able to visit university campuses before deciding if it is the right fit is one that seems to have been solved. Many universities have begun offering virtual tours of their campuses to allow students the opportunity to assess whether or not a school meets the student’s needs both academically and emotionally.

FTCC’s Office of University Outreach provides many opportunities and programs to promote a better understanding of the academic landscape of various colleges/universities for community college students who are interested in pursuing a four-year college degree. Transfer Thursdays are offered every Thursday and allow students to make an appointment with the University Outreach office to receive an evaluation of three universities of the student’s choosing with regards to the major they are seeking. A student’s current course load is evaluated, the student is given additional advisement, and the student is then registered, if this is their end goal.

Questions regarding the Virtual College Transfer Day event or other services offered through FTCC’s University Outreach office can be directed to me at
nelsonl@faytechcc.edu or 910-678-8205. 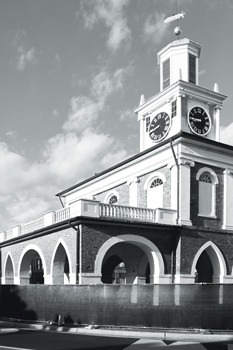 Council decided Oct. 5 to not take immediate action to repurpose or tear down the building. Council voted 6-4 rejecting Councilwoman Courtney Banks-McLaughlin’s efforts to require council to take a formal vote to demolish the historic landmark. Banks-McLaughlin serves District 8 on the city’s west side.

The debate over whether to tear down the historic landmark has been at the center of controversy for decades because it was a place where enslaved people were sold during the early 1800s.

Many African-Americans consider the building a constant reminder of oppression. “The Market House has been an eyesore to many citizens within the city of Fayetteville due to slaves being bought and sold,” Banks-McLaughlin said. She said people representing both sides of the debate have already made their views known to the council through comments, letters, emails and protests.

Those who support the building acknowledge that enslaved people were once sold there but point out that they were also sold at other city buildings and locations.

They note the building is on the National Register of Historic Places and has a rich and significant history not tied to slavery, as well as noted architectural significance. North Carolina ratified the U.S. Constitution at the site where the Market House now stands in center-city Fayetteville. The University of North Carolina, the oldest public university in the country, received its charter there in 1789.

Protests calling for an end to racism and police brutality have been centered around the Market House following George Floyd's death. On May 30, demonstrators tried to set fire to the building which “sustained charring and mass wood loss to the second story floor,” according to federal prosecutors. Two men have since been arrested and charged with “maliciously damaging property.”

When Fayetteville was the temporary capitol of North Carolina, the Market House was described “in a statement of significance as performing two functions: under its arches meat and produce were sold by local farmers, while the second floor served as the Town Hall.” The paperwork does not, however, mention the buying and selling of slaves.

According to a study by Duke University professor John Cavanagh the sale of slaves “happened occasionally at the State House and Market House” for about 75 years up until 1865.

“Sales were spaced on the average about two months apart, if that frequently, and in most instances very few slaves were involved in each transaction,” Cavanagh wrote.

Most of them were reportedly sold “in conjunction with the settlement of estates.” Unlike Charleston and Richmond, Fayetteville was not a slave market.

Twenty years ago, a plaque commissioned by the city was posted on a Market House pillar acknowledging the enslaved people's occasional sale. As for Mayor Colvin’s vision of a pair of ad hoc committees to deal with issues associated with contemporary race relations his hope is regular meetings will get underway soon.

“This is not on the back burner,” Colvin said. 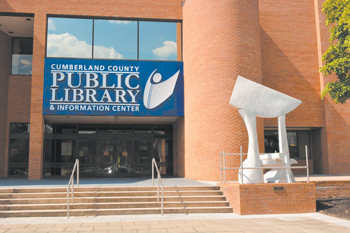 The Cumberland County Board of Commissioners has established temporary virtual learning centers at six of the county’s public libraries for school-age children of county employees.

County Manager Amy Cannon came up with the idea of using the libraries to assist employees who have been unable to report to work because they’re at home with their children.

It is “out of a dire need to ensure that critical and needed services can be provided without delay or disruption,” Cannon said.

Approximately 160 children are expected to participate. Under the agreement, Cumberland County Schools will provide lunches and snacks for the children and assign staff members to assist with operation of the sites. 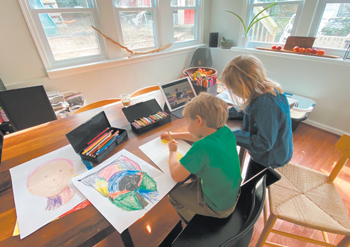 “As we navigate through this pandemic, we encourage everyone to follow the guidance of health officials,” said Shirley Bolden, director of Health Services for CCS. “It’s important that we continue to practice the three Ws.”

CCS is currently operating under Plan C, whereby students participate in remote learning through the end of the first semester.

The origin of each COVID-19 case varies based on the individual; not all the cases listed in the dashboard originated on CCS campuses.

To comply with federal privacy laws, the school district does not release information about individuals who have tested positive for COVID-19 beyond what is indicated in the dashboard.

The district remains in close contact with the Cumberland County Department of Public Health and continues to follow necessary protocols related to the coronavirus. To access the dashboard, visit
http://bit.ly/CCSCOVID-19Dashboard.