The meeting will follow the agenda briefing that is scheduled to begin at 5 p.m. The purpose of the meeting, according to a release from the city, is to discuss personnel matters regarding an evaluation of Hewett and McDonald.

The meeting will be conducted in closed session, the release said.

Hewett has served as city manager since April 2016. Prior to that he was interim permitting and inspections director for Fayetteville. He has nearly 20 years of local government experience in North Carolina, Virginia and Florida, the city said.

Hewett could not immediately be reached for comment late Tuesday afternoon.

Hewett just delivered a recommended $249.17 million budget for fiscal 2022-23 that the City Council approved unanimously on June 14. The budget keeps the property tax rate at 49.95 cents per $100 valuation, and the residential solid waste fee stays at $225 for a single-family residential unit. Also, there are no changes to the stormwater fee of $6 per month.

"There's a list of things he has done," Mayor Mitch Colvin said Tuesday. "We'll get into that tomorrow."

A former public information officer for Halifax County and the city of Wilmington, Hewett first came to Fayetteville in May 2004 as management services director. That role, the city said on its website, focused on strategic planning and public relations for the city.
Hewett was promoted to assistant city manager in April 2007, a position he held until January 2012. That was when he became a city manager in Florida.

McDonald has served as Fayetteville’s city attorney since August 2002. She grew up in Fayetteville and graduated from Pine Forest High School.

She is responsible for providing legal advice and counsel to the City Council and city employees regarding matters that arise during the course and scope of their employment, the website states.

"McDonald is a member of several legal and civic organizations and is licensed to practice law in the states of North Carolina, Georgia and Arkansas," the city said.

She was the city’s first assistant city attorney. At that time, her duties included the enforcement of city code violations.

From 1998 to 2000, McDonald worked as a staff attorney for the Cumberland County Attorney’s Office. Following a two-year stay in Little Rock, Arkansas, she returned to Fayetteville, where she was appointed city attorney by the City Council.

Summer made a splash in Fayetteville on Tuesday morning when the city’s newest splash pad opened with a ribbon-cutting.
The splash pad is outside Lake Rim Recreation Center at 1455 Hoke Loop Road. City Council members joined members of the Kiwanis Club of Cape Fear and Fayetteville- Cumberland Parks &amp; Recreation summer camp participants to cut the ribbon, according to a city
news release.

The Kiwanis Club donated $20,000 to build the splash pad, which is zero-depth entry and uses recycled water, the news release said. This is one of 12 public splash pads throughout Fayetteville and Cumberland County. Access is free. Hours and contact information are posted online. The splash pad is one of several recreation additions in west Fayetteville, the news release said. About four miles from the pad, the Bill Crisp Senior Center is under construction beside
Lake Rim. It is scheduled to open later this summer.

Other recreation projects underway in the city include the expansion of Dr. Martin Luther King Jr. Park, a new tennis center at Mazarick Park, and Mable C. Smith Park, according to the release. 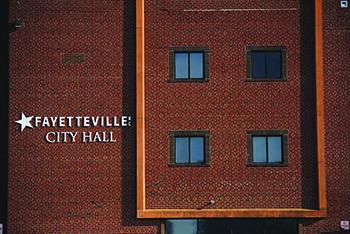 Fayetteville has a new budget for fiscal year 2023.

The City Council unanimously approved the budget Monday night, June 13, forging ahead with little disagreement over Fayetteville’s financial planning for the next year.

The property tax rate will stay the same at 49.95 cents per $100 of property valuation.

The city’s solid waste fee will remain at an annual rate of $225 per single-family residential unit.

The final value of the approved budget is more than $249 million, a slight increase from the slightly more than $248 million initial proposal introduced to council members last month.
Public comments on city vision

While no one spoke at the public hearing on the budget ahead of the council vote, speakers at Monday’s general public comment period of the council meeting addressed the vision of city government, urging the council to better address systemic racism and inequality in Fayetteville.

Several speakers addressed gun violence and police brutality, particularly an incident in January when Jeffrey Hash, an off-duty Cumberland County sheriff’s deputy, shot and killed Jason Walker, an unarmed Black man.
The N.C. Conference of District Attorneys decided in April not to press charges against Hash, arguing that the incident was a case of self-defense under North Carolina law.

“The majority of you should be forging ahead on policy that boldly and unapologetically dismantles the systemic faults that perpetuate inequality in your city. We need accountability, transparency, justice, policy and change.”

After the budget was presented in late May, the City Council met three times to discuss and make alterations.

The city added $865,000 to the general fund, appropriated from various other parts of the budget.

It will also add about $500,000 in increased payment to temporary, seasonal workers, increasing their minimum wage to $15 an hour.
While there were some initial disagreements about this change, the council ultimately approved it unanimously. 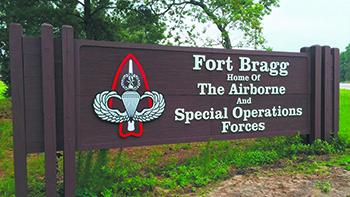 Editor’s note: This story has been updated. A spokeswoman for the U.S. Army Special Operations Command is double-checking the location where the incident occurred.

A soldier assigned to the U.S. Army John F. Kennedy Special Warfare Center and School died Sunday after being struck by a vehicle on an interstate in Duplin County, the U.S. Army Special Operations Command said in a release.

The soldier, whose name was not released, was participating in a training exercise when he was identified as needing medical treatment, the release said.

Womack Army Medical Center, which had limited beds, made arrangements to send the soldier to the Naval Hospital at Camp Lejeune, the release said.

While en route to Camp Lejeune, the soldier exited the vehicle and was struck by oncoming traffic, the release said. He was pronounced dead at the scene.

The incident remains under investigation.

The U.S. Environmental Protection Agency on Wednesday released national drinking water health advisories for four PFAS chemicals including GenX, which has plagued private well water supplies near the Chemours plant off N.C. 87 at the Bladen and Cumberland County line.

GenX is the trade name for a chemical component of a larger collection of man-made chemicals known as per- and polyflouroalkyl substances or PFAS. Manufacturers use GenX, a replacement for some PFAS, to produce nonstick coatings, pizza boxes and a number of other consumer goods. GenX also can be a byproduct of some manufacturing processes.

For years, Chemours has discharged GenX into the Cape Fear River and the air. Groundwater and well testing revealed that Genx has contaminated the drinking water supply for much of Cumberland County’s Gray’s Creek community. Well contamination also has been discovered 25 miles from the Chemours plant, in an area between the towns of Falcon and Wade.

The North Carolina Department of Environmental Quality obtained a consent order that requires Chemours to test private wells for PFAS if they are located within a certain distance of the plant or the Cape Fear River.

The order requires Chemours to provide whole-house filtration for private drinking water wells that contain concentrations of GenX greater than the recommended levels in the newly released health advisories. The N.C. Department of Environmental Quality also requires Chemours to keep affected residents informed about all of the available options for testing and filtration.
The DEQ estimates that more than 1,700 additional private well users are now eligible for whole house filtration systems or connection to a safe public water supply.

GenX and other PFAS have been associated with several types of cancer, liver disease, high cholesterol, low birth weight, immune system disorders and other diseases

The Cumberland County Board of Commissioners on Monday is scheduled to get the latest update on the EPA results as part of its regular monthly meeting. The county administration is keeping the affected population informed about the presence of GenX and any other compounds produced by Chemours that have leached into the Cape Fear River and nearby drinking water wells.

The board meets at 6:45 p.m. in Room 118 of the Judge E. Maurice Braswell Cumberland County Courthouse.

The board recently hired an engineering firm to complete an engineering report for extending water lines in the Gray’s Creek Water and Sewer District. The project is among the board’s top priorities and is funded in the fiscal 2023 budget. The county is working on extending water to two elementary schools and homeowners with contaminated drinking water wells and has unsuccessfully sought the Fayetteville Public Works Commission's inclusion in the project. PWC did participate in paying for the engineering study.

The EPA also invited states and U.S. territories to apply for $1 billion in Bipartisan Infrastructure Law grant money to fix PFAS and other drinking water contaminants. The $1 billion would be the first of $5 billion available in grant funding, specifically for small or disadvantaged communities.

A news release from the Southern Environmental Law Center said the EPA drinking water health advisories for GenX and other PFAS show the need for EPA and state agencies to enforce existing laws against polluters.